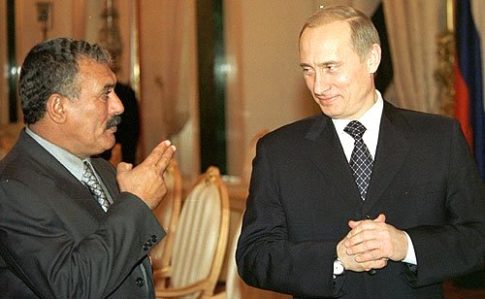 – Yemen Offers Russia Use Of Its Airports And Ports In “Fight Against Terrorism”:

While Obama was golfing in the midst of another Louisiana natural disaster, and is set to end his vacation so he can do what is truly important, support Hillary Clinton in the presidential race, Putin has been busy making new friends: first he did the seemingly impossible, having rekindled relations with Turkey to the point where Ankara itself is warning it may quit NATO to seek “military cooperation” with Russia, followed quickly by strengthening relations with Iran so that Moscow can now use an Iranian airbase to strike ISIS, much to the angry dismay of the US and the United Nations, the latest stunning pivot toward Russia comes from yet another civil war-torn nation, Yemen, whose former president, Abdullah Saleh, said its newly-formed governing council could work with Russia to “fight terrorism” by allowing Moscow use of the war-torn country’s military bases.

What makes the announcement even more striking is that Ali Abdullah Saleh, Yemen’s ex-president who was toppled by mass protests in 2011 as part of the Arab Spring launched by none other than the US when it “intervened” in Libya and Egypt, was a former staunch counter-terrorism ally of the US; it is this former US ally who told state-owned channel Russia 24 that Yemen was ready to grant Moscow access to air and naval bases.

“In the fight against terrorism we reach out and offer all facilities. Our airports, our ports… We are ready to provide this to the Russian Federation,” Saleh said in an interview in Sanaa.

While the ex-strongman may lack the clout to implement such an offer, Reuters admits that officials from the party he heads now run a political council that controls much of the country along with the Houthi movement allied to Iran.

The offer takes place 48 hours after the U.S. officials told Reuters the Pentagon has withdrawn from Saudi Arabia its personnel who were coordinating with the Saudi-led air campaign in Yemen, and sharply reduced the number of staff elsewhere who were assisting in that planning. Fewer than five U.S. service people are now assigned full-time to the “Joint Combined Planning Cell,” which was established last year to coordinate U.S. support, including air-to-air refueling of coalition jets and limited intelligence-sharing, Lieutenant Ian McConnaughey, a U.S. Navy spokesman in Bahrain, told Reuters.

Incidentally, while U.S. officials said the reduced staffing was not due to the growing international outcry over civilian casualties in the 16-month civil war that has killed more than 6,500 people in Yemen, the Pentagon, in some of its strongest language yet, also acknowledged concerns about the conflict, which has brought Yemen close to famine and cost more than $14 billion in damage to infrastructure and economic losses.

Meanwhile, Russia remains the only major country that maintains a diplomatic presence in Yemen where a 16-month war between a Saudi-led coalition and the Houthi rebels has killed over 6,500 people and raised the prospect of famine in the Arab World’s poorest country. Russia abstained from a United Nations Security Council resolution in 2015 that imposed an arms embargo on the Houthi rebels.

Many have condemned ongoing Saudi airstrikes which have led to thousands of civilian casualties, culminating last week with the death of over a dozen hospital workers killed in a Saudi bombing raid at a Doctors without Borders facility. Ironically, just two months ago, the Saudis had threatened to leave the UN over human rights criticism in Yemen.

The Yemen civil war, stoked by the Saudi airstrikes, has allowed Islamist militants including al Qaeda and the Islamic State to flourish, even though the United States has for years launched drone strikes against groups in Yemen.

Moscow’s relations with Yemen date back decades and until the break-up of the USSR, Reuters recalls: thousands of Soviet military advisers and trainers worked in the formerly-independent south.

On Saturday tens of thousands of Yemenis rallied in the capital to show support for the Houthi-led bloc as the head of the group’s new governing council vowed to form a full government in the coming days.

In an apparent response to the Houthi show of force, ambassadors from the G18 group of nations, including Russia, that has backed U.N. peace talks to end Yemen’s civil war issued a statement condemning “unconstitutional and unilateral actions in Sanaa.”

As for the latest Yemeni pivot, it confirms that far from content with its recent diplomatic success in Turkey and Iran, Putin continues to expand his middle-east axis, in the process sending Saudi Arabia a message that going forward any Saudi attacks against Yemen may be frowned upon by the Kremlin, which is additionally becoming an increasingly dominant military force in the region, with military presence in Syria and Iran, and – perhaps soon – in Turkey and Yemen as well.

Finally, the Yemen pivot takes place just 5 days after China appears to have finally joined the Syria proxy war, announcing it would provide “aid and military training” to the Assad government, in effect siding with Russia’s “vision” on the future of Syria, and perhaps the entire region.