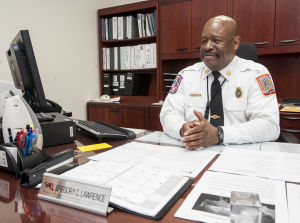 This is what happens when you focus on race instead of merit.

A black man hired 9 white men who he thought were the most qualified to be firefighters and protect people.  The NAACP then complained because the firefighter class was full of white guys.  Of course, they went ahead and fired the black man who did the hiring.   Then, just when you think it can’t be any more ridiculous it is, the NAACP complained that he was fired.

Baltimore Sun – Officials at BWI Thurgood Marshall Airport announced the hiring of its fire-and-rescue department’s first Hispanic fire chief Thursday, shortly after acknowledging that they had terminated its acting chief, an African-American, the day before.The hiring of Victor N. Ferreira Jr., a 52-year-old retired Prince George’s County fire official, comes amid complaints about diversity within the airport’s fire department, following the hiring of an all-white class of firefighter recruits last month. Ferreira said in a statement that one of his goals is “to ensure a diverse, inclusive workforce.” “I intend to reach out to a number of organizations to follow up on initiatives that focus on boosting opportunities for minority firefighters,” he said.

Meanwhile, officials with the International Association of Black Professional Fire Fighters and the National Association for the Advancement of Colored People questioned the airport’s termination of Gregory Lawrence, who was named acting chief in November. The two organizations criticized the airport’s fire department about the all-white recruit class earlier this week.

“This doesn’t smell good at all,” said James Hill, president of the International Association of Black Professional Fire Fighters. “We have got to get to the bottom of this. Somebody needs to answer the question of why he was terminated.” Others also expressed concerns. “I don’t know the substantive grounds that are there for the acts that have been taken, so you’re sort of in a holding pattern until you find out what the cause is for the termination,” said Daryl Jones, an Anne Arundel County councilman who represents the district where BWI is located. “It certainly raises suspicion. … It looks like there is a call and response there.” Jonathan Dean, a spokesman for the Maryland Aviation Administration, confirmed that Lawrence was terminated but described the decision as a “personnel matter” that airport officials will not comment on. Airport officials would not answer questions about the timing of Lawrence’s termination and the complaints being raised about the recruit class.The recruit class was composed of nine white men, whom Dean called the most qualified candidates.With their hiring, the 89-person fire-and-rescue department became 26 percent minority and women and 13 percent African-American, Dean said.