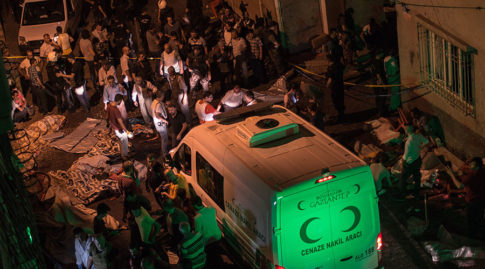 Ambulances arrive at site of an explosion on August 20, 2016 in Gaziantep following a late night militant attack on a wedding party in southeastern Turkey.

A suspected suicide bombing in Turkey has targeted a wedding ceremony in Gaziantep, killing at least 30 people and injuring almost 100. Authorities have temporarily halted media coverage of the “barbaric” attack in the southern city near the Syrian border.

“A suicide bomber blew himself up” in a neighborhood where a massive outdoor wedding was taking place, according to reports on social media.

At least 30 people were killed and 94 injured in the alleged terrorist attack, according to the governor’s office.

While there was no immediate claim of responsibility, a parliamentary deputy from the ruling AK Party, Samil Tayyar, said that Islamic State (IS, formerly ISIS/ISIL) terrorists were believed to be behind the blast.

Numerous ambulances have been dispatched to the area. According to scarce media reports, the injured, which include children, have been taken to at least four hospitals in the city, and blood donations are urgently needed to save their lives.

Gaziantep Governor Ali Yerlikaya has released a statement saying the blast was an attack by “terrorist organizations,” according to Turkish Haberturk news outlet.

“The aim of terror is to scare the people but we will not allow this,” said Turkish Deputy Prime Minister and Gaziantep’s representative in the Turkish parliament Mehmet Simsek, adding “it is barbaric to attack a wedding,” as cited by AFP.

Prior to the attack, the governorship of the province declared a 15-day special security zone near the border with Syria. The decision to invoke extra security measures followed a recent Islamic State (IS, formerly ISIS/ISIL) rocket attack that came from the Syrian side of the border, striking a Turkish town called Karkamış in Gaziantep Province. Special security zones allow authorities to search all types of border traffic in the area.

💥A possible suicide bomb explosion occured near a wedding ceramony nd a local police HQ in the center of #Gaziantep.https://t.co/hvTEHX24PO

In the meantime, Turkish media authorities (RTUK) have temporarily suspended the broadcast of information regarding the deadly blast, citing national security concerns. In making the announcement, the government watchdog said that the measures had been introduced in order to avoid spreading “fear in the community which could create panic and chaos.” It also noted that publications defying the order could “serve the purpose of terrorist organizations” responsible for the blast.