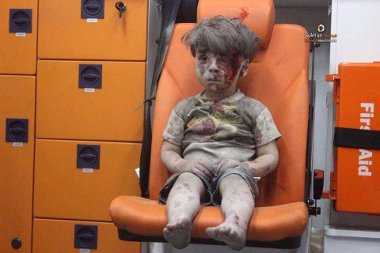 Mahmoud Raslan, a photojournalist who captured the image, told the Associated Press that emergency workers and journalists tried to help the child, identified as 5-year-old Omran Daqneesh, along with his parents and his three siblings, who are 1, 6 and 11 years old.”We were passing them from one balcony to the other,” Raslan said, adding: “We sent the younger children immediately to the ambulance, but the 11-year-old girl waited for her mother to be rescued. Her ankle was pinned beneath the rubble.”

An internet search for “Mahmoud Raslan”, the claimed “photojournalist”, finds no other pictures or videos attributed to that name.

There are about 15 men standing around the scene and doing nothing. (Next to a “just bombed” site in a warzone? No fear of a double-tap strike?) At least two more men, besides the videographer, are taking pictures or videos. 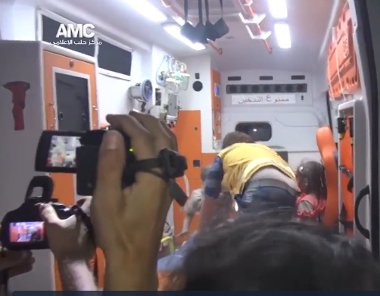 Another kid is carried into the ambulance. In the background there is someone with a white helmet wearing a shirt of the U.S./UK financed “White Helmets” propaganda group.

An animated wounded man is walked towards the ambulance. 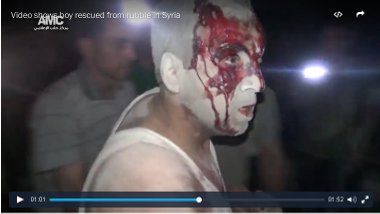 Like the boy, the man seems to have a wound at the upper head. But like the boy he is not bleeding at all. There is some red colored substance on his face but no blood is flowing. That is astonishing. When I rode ambulances as a first-responder, people with head wounds always bled like stuck pigs (they often messed up the car which I then had to clean). As WebMD notes:

Minor cuts on the head often bleed heavily because the face and scalp have many blood vessels close to the surface of the skin. Although this amount of bleeding may be alarming, many times the injury is not severe …

The amount of red colored substance on the boy and the man do not correspond to the amount one would expect from even a minor head wound. There are also no bandages applied or anything else that could have been used to stop an actual head wound from bleeding.

Compare the above to this recent picture from a boy in west-Aleppo. (No “western” media showed this boy and his suffering. He is not on “our side”.) The boy suffered a head wound after an improvised missile from al-Qaeda and its associates hit his neighborhood. He is in care, the bleeding has been stopped. The amount of blood on his body and soaked into his cloth is a multiple of that seen in the above pictures. The blood is also mixed with the other dirt on his face, not painted over. This looks like those patients in my ambulance. This looks real. 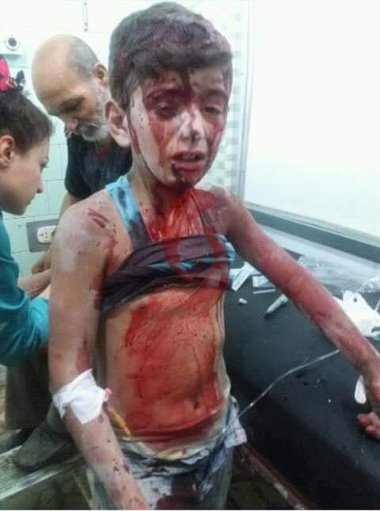 All attributes of the “boy on orange seat” scene and of the video are the same that can be found in dozens of “White Helmets” videos. It is the same theme that occurs over and over again in our picture collection Dramatic Rescue! Man With Kid Runs Towards Camera!.

I am inclined to believe that the video above is just as staged as the other “White Helmets” videos and pictures. The look of the boy’s wound is a bit more realistic than usual but the lack of bleeding, that no one attends to the boy, his non-reaction to touching the “wound” and the general setting of the video scene lets me believe that it is staged.

This new, widely distributed propaganda item comes again at a moment where al-Qaeda and its associates in Syria are in trouble. The Russian air force is hitting them in the rear area of their attack on west-Aleppo and it is hurting them badly. A “humanitarian ceasefire”, which can then be used to reorganize and resupply, is urgently needed. The propaganda helps to increase the pressure for such a demand.

Some of its sponsors want the “White Helmets” nominated for the Nobel Peace Prize. The organization itself lobbies for it on its website. Has anyone else ever done such? 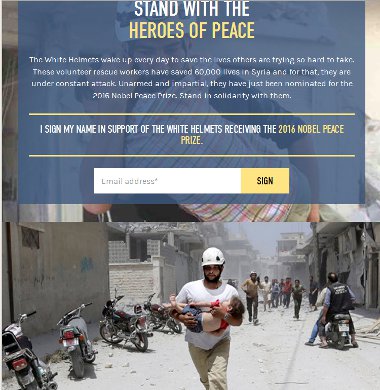 But why not? Obama was nothing more than a marketed product when was handed the Peace Nobel. He then bombed people in seven Muslim dominated countries to dust. There is no good reason then to not give that prize to yet another propaganda tool which also wants more war.

Then again, I find a nomination for the Academy Awards, maybe in the category of “Best Marketed Fakes”, more appropriate.