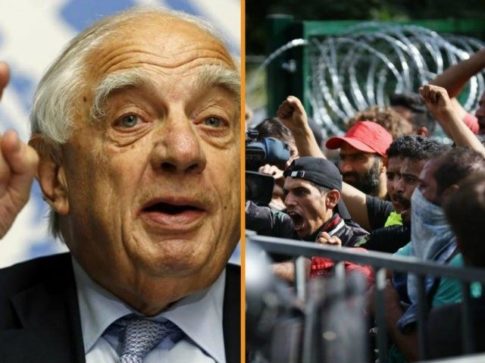 – Soros Leaks Refer To UN Chief As ‘Elite, Behind The Scenes’ Soros Advocate:

The paper, which told of how the migrant crisis presented an “opportunity” for the foundation to extend its global influence and attract more money, mentions Sutherland’s pro-migrant work. The foundation notes that through Sutherland they have been able to advocate at an “elite level” behind the scenes.

Open Society are one of the contributors to the Columbia Global Policy Initiative (CGPI) which hosts Mr. Sutherland and claim that through Sutherland they are able to influence international migration policy due to the current migrant crisis. On the United Nations website Sutherland is described as a “strong advocate for promoting practical action to increase the benefits of migration” and has routinely made comments against national borders and national sovereignty in Europe. Sutherland has even called for the European Union to “undermine the homogeneity” of member states.

Sutherland has even gone as far as defending all migrants regardless of whether or not they are legitimate refugees saying, “We’re not just talking, either, about refugees. We’re talking about economic migrants, many of whom could be the future, and some at the present… are survival fighters. They’re not to be dismissed as an irrelevance.”

Last Year Sutherland argued that Britain was “xenophobic” because of border controls that stop the flow of migrants from Calais reaching Britain and earlier this year claimed that Brexit was an “act of insanity” and saying, “every independent voice in the world is saying it would be an act of insanity to leave the EU.”

The Open Society International Migration Initiative (IMI) program claims that Sutherland and his team are very closely linked saying, ” IMI’s access to the Sutherland team’s discussions has allowed us to keep civil society partners up-to-date on the latest developments, in order to inform advocacy and campaigning strategies prior to the events and to plan follow up actions.”

IMI also funded the “Sutherland Report” which they claim will, “set the stage for institutional reforms to global migration governance, and to break new ground on protections for migrants outside the asylum system,” or protection for migrants regardless if they qualify for asylum in Europe.

“CGPI’s elite-level behind the scenes advocacy through Peter Sutherland, has positioned its team of experts to influence policy and practical follow-up to global events,” the author writes. They note that their funding of the Migration Policy Institute (MPI) allows the foundation to have influence over actively pro-migrant organizations like Sutherland’s team and MPI who they say are a “neutral voice” though MPI received over half of the 2015 budget of the IMI, some 2.2 million dollars.