“Did you see what happened in Turkey?” said Maduro, in a televised public event on Thursday evening. “Erdogan will seem like a nursing baby compared to what the Bolivarian revolution will do if the right wing steps over the line with a coup.“

– After Confiscating Their Guns, Venezuela’s Maduro Has Another Warning For Coup Plotters:

Yesterday we reported that Venezuela’s Interior Minister, Nestor Reverol, launched a campaign in Caracas to “disarm” citizens in an effort to curb rampant violence.  Venezuela has the world’s second highest murder rate which Reverol attributes, at least in part, to heavily armed gangs roaming the streets with guns which are acquired from “corrupt” police officers.  To address the violent crime issue, Venezueala has decided to chop up over 2,000 shotguns and pistols and laser tag ammunition as apparently the majority of ammunition used for violent crime in the country is manufactured by the state and “sold by corrupt police” as well.

To be sure, Venezuela does indeed have a high murder rate: 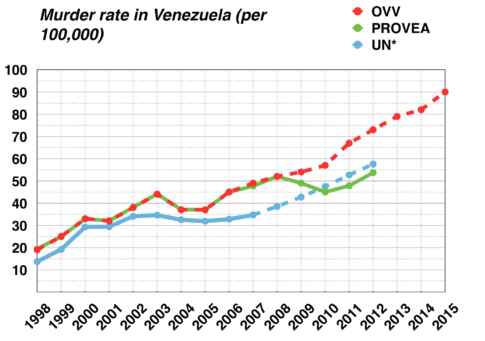 However, the real reason for the crackdown on guns was different: after last month’s failed Turkish coup, the socialist ruler is worried – with good reason – that he may be next.

So in order to preempt “next steps”, and just in case gun confiscations are insufficient to prevent the inevitable, the Venezula ruler took to direct threats, warning his countrymen that Erdogan’s purge would look like child’s play compared with the action he would take if opposition tried something similar in the OPEC nation.

“Did you see what happened in Turkey?” said Maduro, in a televised public event on Thursday evening. “Erdogan will seem like a nursing baby compared to what the Bolivarian revolution will do if the right wing steps over the line with a coup.”

Ever since Maduro’s mentor, the late President Hugo Chavez survived an opposition-backed coup attempt in 2002, the revolution he named after Latin American liberator Simon Bolivar has tarred opponents as intent on retaking power by force.

Maduro is facing plunging popularity as low oil prices and economic mismanagement have dragged one of the wealthiest countries in the Americas into a deep recession, triggering shortages of basics like food and medicines.

The opposition plans a big march in Caracas on Sept. 1 to demand a recall referendum aimed at cutting short Maduro’s six-year term, due to end in 2019.  After gathering more than 200,000 signatures for the effort, the opposition is waiting for clearance from the National Electoral Council to get 20 percent of the 20 million person electorate to sign in order to move forward.

Sadly for the Venezuelan people, the referendum will not happen for one simple reason: as Bloomberg reported earlier, “in a replay of one of the ugliest chapters in the two-decade rule of the socialist party in Venezuela, a top government official said Thursday that a list of those who signed a petition seeking to recall President Nicolas Maduro will be handed over to government ministries and state-run companies.”

“In a revolution, revolutionaries must be in charge of state institutions, not political opponents,” Diosdado Cabello, a top official in the ruling Socialist Party and a lawmaker, said at a rally. “This is not a violation of the right to work.”

Cabello has made similar threats earlier this year, but Thursday’s comments brought back memories of the so-called “Tascon List” which was used by the government under then President Hugo Chavez to fire state workers and bar others from everything from jobs to loans for having signed a petition for a recall referendum in 2004 that Chavez eventually survived. The list was compiled by then lawmaker Luis Tascon and electronic versions of the list circulated throughout Venezuela even being sold by sidewalk vendors. Some Venezuelans even attempted to pay officials to be removed from the list.

Maduro, whose approval rating has is about 21%, according to the latest polls from Datanalisis, hasn’t yet publicly commented on efforts to blacklist state employees who signed. Instead he has decided to skip that step and proceed directly to threatening the coup platters with a fate worse than prison.