“Perpetual war with perpetual enemy and perpetual equipment, in this case the 1950’s B-52 Stratofortress famously inaccurate, indiscriminate saturation carpet bomber. Progress? I think not.” 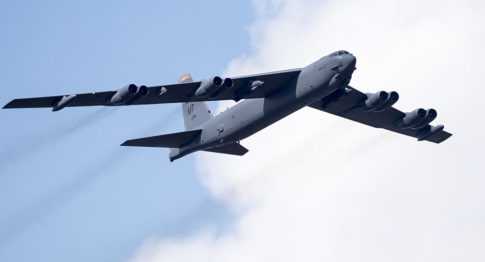 – US Air Force Flies B-52 Bombers in Afghanistan for First Time in Decade:

US Air Force Chief of Staff General David L. Goldfein announced in a media release Tuesday that Boeing B-52H Stratofortress strategic bombers have completed airstrikes against targets in Afghanistan for the first time in ten years.

He stated, “We got the B-52 back in the fight in Afghanistan and Iraq,” adding, “We have the B-52 contributing to a significant ground effort and employing weapons in close proximity of friendly troops who are under attack [and] who are preparing the battlefield in new ways.

Godfein’s news release indicated that the Air Force’s B-52H detachment at the Al Udeid Air Base in Qatar has flown nearly 270 sorties since April, dropping over 1,300 bombs in more than 325 strikes, in Operation Inherent Resolve in Iraq and Syria.

The USAF has conducted more than 140 strikes and flown over 800 sorties since June, when US President Barack Obama ordered air power to be used more proactively in the country.