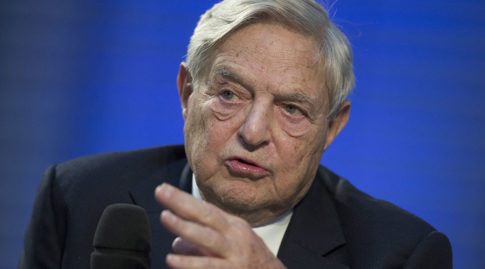 An American radio host has gone after Billionaire George Soros – DIRECTLY — by revealing Soros HOME ADDRESS on the radio, in a direct challenge to Soros’ public activism!  No media personality ever did this but tonight, Hal Turner did exactly that on “The Hal Turner Show.”

Soros is well known for supporting cultural-wrecking groups like Occupy Wall Street, Black Lives Matter and a host of others.  Where social unrest is found, in places like Fergusen, MO and Baltimore, MD (where Blacks rioted after police shootings) Soros fingerprints can be seen . . . through financial grants from his Foundation to the rabble-rousers.

Soros appears to have a globalist agenda of open borders and perhaps even doing away with the notion of nation-states altogether.  This has resulted in social, cultural and political tumult in many places, for many years.

Tonight, during his radio show, Turner took issue with Soros and an Instgram posting by Soros son, Alex.  Specifically, Alex posted a photo of the Hotel Sacher in Vienna, to his Instagram account.  The photo shows the front of the hotel, above which are five flags:  The U.S., Germany, The UN, Austria and The EU.”   In the comments area next to the photo, Alex Soros posed a dark question:

“The question is, which flag will fall first?”

Turner went to great lengths to explain how the Soros family is involved in tearing down entire countries, and that these activities have harmed many people.  Turner gave out Soros home address in Katonah, NY and repeated the street address several times “in case it is the US flag that “falls”  . . .  people will know who to blame.”

He reminded the “elite” that people have a right to defend themselves, as do citizens to defend their countries.  Ominously, he told Soros, “be careful (with what you do to America) we’re watching.”

Turner made it absolutely clear he had no intention to personally go to Soros home or do take any action at all, and he repeatedly cautioned his listeners not to take any action “at this time.”  But the info was already out and now, it seems that one of the world’s most reviled Billionaires may have to sit in a tree house of his own construction.

Will anti-Soros activists protest at Soros home?    What will Soros do if he gets a taste of his own activist medicine? Time will tell.

An audio archive of the radio show is available free online.  Folks can fast-forward to 1h:45m into the show when Turner comes back from a commercial break, he spends the final fifteen minutes of the two hour show on this Soros subject.  The audio archive is HERE but if you only want to hear the Soros material, fast-forward to 1h 45 Min into the two hour show.  That’s when Turner begins the Soros material after he returns from a commercial break.