– How the Global Elites Screws Peons (While Media Fools Cheer):

Do the Merkels and Junckers of the world give a rat’s ass about the problems they cause?

Did Bush or Cheney give a rat’s ass about the mass slaughter of hundreds of thousands of innocent civilians in Iraq?

Does Obama care about all the innocent victims of the US’s unconstitutional drone policy?

The answer to those questions is easy. But why? The short answer is neither the global elite nor their families are ever in a position to be damaged by their own actions.

As a result, those in power see people at the bottom as aliens whose bizarre emotions they must try to manage. 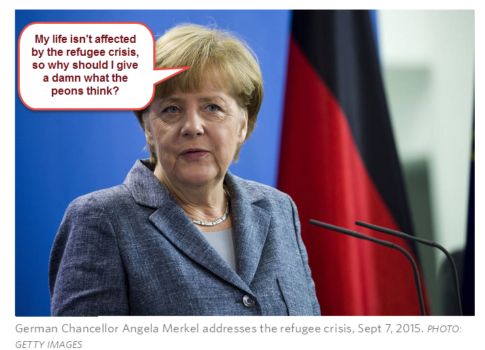 Recently I spoke with an acquaintance of Angela Merkel, the German chancellor, and the conversation quickly turned, as conversations about Ms. Merkel now always do, to her decisions on immigration.

The acquaintance said, he believed the chancellor was operating in pursuit of ideals. Moreover she is attempting to provide a kind of counter-statement, in the 21st century, to Germany’s great sin of the 20th. The historical stain of Nazism, the murder and abuse of the minority, will be followed by the moral triumph of open arms toward the dispossessed. That’s what’s driving it, said the acquaintance.

It was as good an explanation as I’d heard. But there was a fundamental problem with the decision that you can see rippling now throughout the West. Ms. Merkel had put the entire burden of a huge cultural change not on herself and those like her but on regular people who live closer to the edge, who do not have the resources to meet the burden, who have no particular protection or money or connections. Ms. Merkel, her cabinet and government, the media and cultural apparatus that lauded her decision were not in the least affected by it and likely never would be.

Nothing in their lives will get worse. The challenge of integrating different cultures, negotiating daily tensions, dealing with crime and extremism and fearfulness on the street—that was put on those with comparatively little, whom I’ve called the unprotected.

The powerful show no particular sign of worrying about any of this. When the working and middle class pushed back in shocked indignation, the people on top called them “xenophobic,” “narrow-minded,” “racist.” The detached, who made the decisions and bore none of the costs, got to be called “humanist,” “compassionate,” and “hero of human rights.”

In Manhattan, my little island off the continent, I see the children of the global business elite marry each other and settle in London or New York or Mumbai. They send their children to the same schools and are alert to all class markers. And those elites, of Mumbai and Manhattan, do not often identify with, or see a connection to or an obligation toward, the rough, struggling people who live at the bottom in their countries. In fact, they fear them, and often devise ways, when home, of not having their wealth and worldly success fully noticed.

I close with a story that I haven’t seen in the mainstream press. This week the Daily Caller’s Peter Hasson reported that recent Syrian refugees being resettled in Virginia, were sent to the state’s poorest communities. Data from the State Department showed that almost all Virginia’s refugees since October “have been placed in towns with lower incomes and higher poverty rates, hours away from the wealthy suburbs outside of Washington, D.C.” Of 121 refugees, 112 were placed in communities at least 100 miles from the nation’s capital. The suburban counties of Fairfax, Loudoun and Arlington—among the wealthiest in the nation, and home to high concentrations of those who create, and populate, government and the media—have received only nine refugees.

Some of the detachment isn’t unconscious. Some of it is sheer and clever self-protection. At least on some level they can take care of their own.

One of the most disgusting and arrogant articles I have seen in a long time was written by James Traub, a contributing editor at Foreign Policy.

This ignorant (to use his own word) fool (my word but not nearly strong enough) says It’s Time for the Elites to Rise Up Against the Ignorant Masses.

“The Brexit has laid bare the political schism of our time. It’s not about the left vs. the right; it’s about the sane vs. the mindlessly angry,” says Traub.

Who the hell is Traub to decide what is right for the masses?

The masses were against the Iraq war (and correctly so). We had war anyway, with devastating consequences.

The masses never would have fought a war with Vietnam. We had a war, and we lost it. How many US citizens are dead, physically disabled, or mentally disabled because the elite so much believed in the asinine “Domino Theory” that they were willing to go into a stupid war on that belief?

Traub is upset that the masses have finally figured out the global elite don’t give a rat’s ass about them.

People are not “mindlessly angry”. They are angry because they have been ripped off by the Fed, by their governments, and by ignorant media jackasses who are clueless about why there is so much anger.