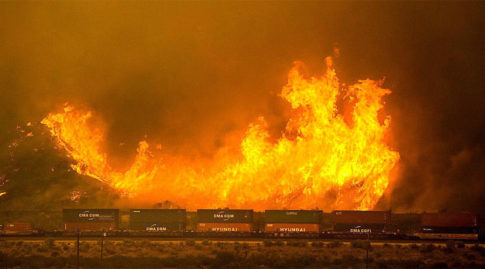 Wildfires started within the last week are threatening homes across California, sending more than 80,000 residents fleeing under mandatory evacuation orders and warnings. Several blazes are nowhere close to being contained. At least one person has died.

With California coping with the fifth year of the worst drought in over a century, the dying trees and dry underbrush have turned the state into a tinderbox. Firefighters are battling several massive blazes throughout the Golden State. The wildfires have caused millions of dollars of damage so far, and destroyed hundreds of homes and other buildings.

Map of current major #wildfires in #California for August 17. #BlueCutFire#ClaytonFire#SoberanesFire#ChimneyFirepic.twitter.com/Jx1naVzVIu

The Blue Cut Fire near Devore in San Bernardino County began in the late morning hours on Tuesday. Within an hour, it had spread to 1,000 acres; by Wednesday afternoon, the inferno had engulfed 65,000 acres with 0 percent containment.

In the town of Wrightwood, about 14 miles west of where the Blue Cut Fire ignited, half of the 4,500 residents refused to adhere to “mandatory” evacuation orders Wednesday, according to KABC.

Steve Bell, a local, told the news station he would leave once he saw the flames “right down the street.”

That may come sooner than later, officials warn, as Wrightwood is just a few miles away from the licking flames, which have hopped a half-mile in some instances. Meanwhile, the town’s businesses remain open, as the business end of the wildfire continues to spread.

“There is imminent threat to public safety, rail traffic and structures” in the area, the National Wildfire Coordinating Group said in its update Wednesday morning. “An estimated 34,500 homes and 82,640 people are being affected by the evacuation warnings.”

The blaze has also shut down Interstate 15, the main route between Southern California and Las Vegas, Nevada.

The Clayton Fire in Lake County, which authorities believe was started by an arsonist on Saturday, has grown to nearly 4,000 acres, and is 40 percent contained. Currently, 380 structures in the area are threatened by the fire, while 175 have already been destroyed.

On Monday, Clearlake resident Damin Pashilk, 40, was arrested and charged with 17 counts of arson. He is suspected of starting the central California fire, investigators from the California Department of Forestry and Fire Protection (CAL FIRE) said in a statement.

The Chimney Fire is blazing in San Luis Obispo County, on the central coast. Also started on Saturday, the 7,300-acre wildfire is 25 percent contained. Currently, 232 structures are threatened, 40 have been destroyed and six damaged amid mandatory evacuations.

The Soberanes Fire, which has killed one person and injured three others, was caused by an illegal campfire in Monterey County. The fire has grown to more than 76,000 acres, but is 60 percent contained. It is threatening 410 structures and destroyed 57 homes and 11 outbuildings destroyed, while three structures and two outbuildings damaged.

The most dangerous fire season is still ahead, California officials warn, as the dry Santa Ana winds are expected to arrive in September.