In Alberta, the Oil Sands King in the North, the economy continues to be crushed by crude prices.  With the oil fallout has come massive job losses, business closings, soaring office vacancy rates and increasing crime.  None of this should be terribly surprising for a region of the world that is somewhat dependent on oil sands production.  At current oil prices most oil sands projects can’t even cover their cash operating costs which are estimated to be $50 per barrel much less the estimated $90 per barrel required to start a new project.

As recently reported by the Huffington Post, Calgary is on pace to close 7,000 businesses in 2016 up from 6,337 in 2015 and 5,902 in 2014. Furthermore, a separate Huffington Post article highlights a recent report from CBRE which found that vacancy rates of commercial office space in Calgary rose to 22.2% in 2Q 2016, the highest level since 1983, and up massively vs. the 13% vacancy rate from one year prior.  The report also points out that 4mm sq. ft. of office space has come online in just the past 6 quarters alone.

And just to make things even worse, 3 new commercial buildings are wrapping up construction within the next year and which should add a additional 2.4mm sq. ft of capacity.  Seems like timing was just a little late on those projects. 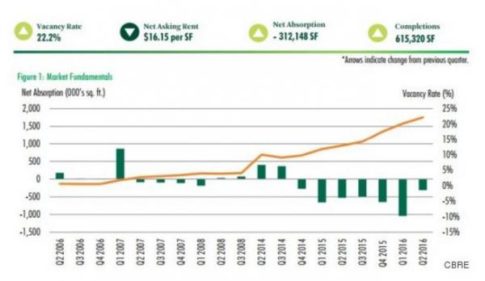 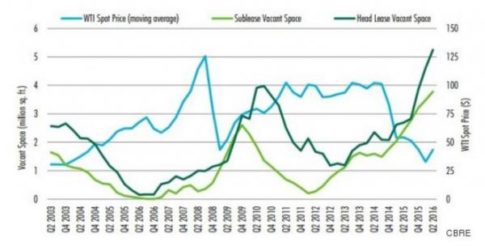 The impact of the oil downturn is even more pronounced in Edmonton.  Per a report from CBC News, the economic situation has become so dire that they’re seeing a spike in child prostitution as kids are “having to find their own resources to meet their basic needs.”

Some children who haven’t yet reached their teens are being recruited for sex work in Edmonton, as child prostitution becomes more prevalent because of the economic downturn, say frontline workers in social service agencies.

“There’s people out there looking to make money,” she says. “It’s turning our kids into their little cash cows.”

The exploitation of children has changed in recent years, he says, and now reflects “the echoes of an economic downturn.”

“We’re having a lot more kids having to find their own resources to meet their basic needs.”

What’s even more disgusting is that kids are being recruited into the sex trade only to then be traded around as property.

Recruiters, Cautley says, commonly tells kids: “I think you’d be really good at this. You should try this.”

Soon the message changes, to: “You owe me. So you’re going to go back and earn money to pay back everything I’ve bought you.”

One challenge Cherrington points to is that interactions have become less visible.

“It’s not the traditional walking the streets,” he says. “The vast majority are on Backpages. It’s a lot darker place on the Internet.”

He says kids end up being taxied around between johns that way.

YESS worked with police last year to help a girl who was being kept in a tent in a ravine by a man who sold her as a prostitute, Cautley says.

Yet another crushing side effect of our engineered economic bubbles.  Inefficient (rigged) markets create unsustainable oil prices which have to be exploited before they crash again…leading to massive boom/bust cycles that leave a trail of human and economic destruction in their path when the bubble pops.