“The end of free speech and the beginning of mass mind kontrol.” 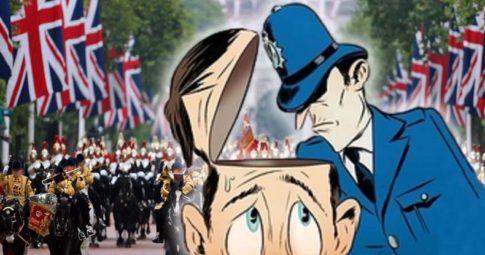 Thought police now patrol social media platforms and online forums to quash putatively ‘abusive’ vitriol with the help of feckless civilians urged to end freedom of speech under the guise of rooting out hate.

Expected to run for two years at a cost of $2.2 million (£1.7 million) — of which the Home Office will contribute $581,000 (£450,000) — the London Mayor’s Office for Policing And Crime (MOPAC) believes severely curtailing free speech is necessary due to “the increasing role that online hate played in targeting individuals and communities.”

Online abusers, the Mayor’s Office said, operate behind a “veil of anonymity,” making conventional policing of hate difficult due to lack of skills and equipment — so authorities have allotted the budget for the creation of a police-civilian alliance to report spewers of venom to police.

“By establishing this unit,” explained a spokesperson for the Metropolitan Police cited by the Business Standard of the Online Hate Crime Hub, “we are sending a strong message to those who use online forums to spread hate that their actions will not be tolerated. The Metropolitan Police Service continues to have a zero-tolerance approach to all forms of hate crime.

“The Met encourages all victims of hate crime to report any incident to police and will make every effort to hold offenders to account and bring them to justice.”

To be perfectly clear, what authorities consider a worthy of reporting in this instance amounts to little more the vitriolic rhetoric — “criminal and non-criminal incidents” — a term so nebulous and subjective in nature, this extirpation project represents both a dangerous precedent and the slipperiest of slopes.

Critics, justifiably alarmed at the prospect of thought police, have posited the program will not only nullify the free speech bastion the Internet represents, but could lead to arrests for online jokes or offensive posts — or worse.

“There’s a risk of online vigilantism, where people who are offended by the least thing will have a licence to report it to police,” cautioned Andrew Allison of the libertarian group, Freedom Association, the Daily Mail reported.

If this recalls for you George Orwell’s government-loyal child Spies from the dystopian portent 1984, you wouldn’t be far from the truth.

In fact, in one example cited by the Daily Mail, a mother of two found herself the subject of a police inquiry after writing on friend’s Facebook post that she wanted to throw an egg at David Cameron. Yes, seriously.

Desiring to toss an egg at a politician hardly seems relevant to fighting actual crimes of harm — but as an illustration of the potential for offhand comments of no malintent to be perceived as criminal in nature, it handily does the job. And the non-threat of an egg isn’t the only absurd example.

A relative posted a photo to Facebook of three Siddiqui family members clad in camouflage during a paintballing expedition with the obviously jocular caption, “ISIS training day” — but the family promptly received a visit from police officers.

“Police are becoming moral arbiters rather than dealing with real issues that threaten our security,” asserted Frank Furedi, University of Kent professor emeritus of sociology.

For Americans unnerved by the U.S.’ continued toying with legislation and court rulings designed to quell the fundamental right to free speech, the U.K. presents a case study in how quickly ‘political correctness’ can run amok.

Last year, laws aimed at combating ‘malicious communication’ received a frightening update: Online trolls can now be jailed for up to two years.

But trolls were already landing behind bars in record numbers. According to a report from the Telegraph, 694 people went to jail for online trolling in 2014 — the rough equivalent of two each day — and, worse, 70 juveniles were among the astonishing 1,501 people prosecuted under the law prior to both its update and the new thought police program.

Whatever auspicious intent might underlie the creation of this civilian-police allied unit is utterly lost to its potential to damn innocent people — guilty of nothing more than offending the thin-skinned among us — to possible jail time.

“Online bullying is an increasingly serious problem but police should not be proactively seeking cases like these and turning themselves into chatroom moderators.

“With such measures, even if well-intentioned, there is a very real danger of undermining our very precious freedom of speech.”

A glaring omission of the Online Hate Crime Hub’s statement of (purported) purpose is the lack of any tolerance education program for the perpetually offended — the creation of which could foundationally fight the hate speech the Hub claims to desire obliterating.

“It’s now very common to hear people say, ‘I’m rather offended by that.’ As if that gives them certain rights,” said English comedian, actor, writer, and activist, Stephen Fry, in 2005. “It’s actually nothing more … than a whine. ‘I find that offensive.’ It has no meaning; it has no purpose; it has no reason to be respected as a phrase. ‘I am offended by that.’ Well, so fucking what.”

As per government usual, the rush to apply superficial bandages to the ‘problem’ of online hate speech provides the vehicle for far worse governmental intrusion into our private lives later on.

Literally policing speech is the kissing cousin of policing thought — when it seems the whole world just needs a lesson in the age-old adage … you might know … something about sticks and stones?