In the two days since the Soros Open Society Foundation hack by the DCLeaks collective, several notable revelations have emerged among the data dump of over 2,500 documents exposing the internal strategy of the organization, which expose some of Soros’ tactics to influence and benefit from Europe’s refugee crisis, the opportunistic funding and influence of media organizations, providing cash for assorted “pro-democracy” groups including the infamous La Raza, Soros’ funding of various “social justice” organizations while paying to track unfavorable media coverage including that of Pamela Geller.

One particular leaked memo, profiled earlier by the Daily Caller, argues that Europe’s refugee crisis should be accepted as a “new normal,” and that the refugee crisis means “new opportunities” for Soros’ organization to influence immigration policies on a global scale. OSF program officer Anna Crowley and program specialist Katin Rosin co-authored the May 12 memo, titled “Migration Governance and Enforcement Portfolio Review.”

As the authors write in the introduction, one of the purposes of the review “consider the effectiveness of the approaches we have used to achieve change at the international level.” A section of the review titled “Our Work” describes how America’s least transparent think tank has worked with “leaders in the field” to “shape migration policymaking and influence regional and global processes affecting the way migration is governed and enforced.”

This may be of particular interest to Germans, the majority of whom are displeased with Merkel’s “open door” policies in the aftermath of the recent terrorist attacks on German soil.

In a section titled, “Our Ambitions,” the authors explain: “Our premise for engaging in work related to governance was that, in addition to mitigating the negative effects of enforcement, we should also be supporting actors in the field proactively seeking to change the policies, rules, and regulations that govern migration.”

They write that “we also believed that advances at the regional or international levels could create impetus for policy change or implementation of existing norms at the national level. We deliberately avoided the term ‘global governance’ because there is no single system at the global level for managing migration.”

The same section later states that IMI “has had to be selective and opportunistic, particularly at the global level, in supporting leaders in the field to push thinking on migration and better coordinate advocacy and reform efforts. We have supported initiatives, organizations, and networks whose work ties directly to our aims in the corridors.”

“Early on, IMI identified a handful of organizations able to engage on migration globally and transnationally, elevating IMI’s corridor work beyond the national level,” reads another section of the memo, entitled “Our Place.”

“These included key think tanks such as the Migration Policy Institute (MPI) and advocacy networks such as the International Detention Coalition (IDC).” (The authors later note that MPI, a strong advocate of amnesty for illegal immigrants in America, “is sometimes criticized for its closeness to governments, [but] flexible funding from OSF has allowed it to maintain some independence from the governments it advises.”)

The memo also notes that “IMI played a central role in establishing and influencing the goals of two new [European Programme for Integration and Migration] sub-funds on the Common European Asylum System (CEAS) and immigration detention.

The authors note that “the current refugee crisis is creating space to reconsider the governance of migration and the international refugee regime.” One reason for this is that the developing countries that make up the Group of 77 at the United Nations were motivated by the refugee crisis to keep immigration issues on the “global agenda,” the memo states. “The refugee crisis and the fear that the interests of migrants fleeing poverty, climate change, generalized violence, or natural disaster would be overlooked at these fora have generated a push from G77 countries to ensure other migration issues remain on the global agenda.”

They also explain that the current crisis provides “new opportunities” for influencing immigration policy on a global scale.

“The current climate presents new opportunities for reforming migration governance at the global level, whether through the existing multi-lateral system, or by bringing together a range of actors to think more innovatively. Our long-standing interest and investment in global work means we have many of the right partners and are positioned to help others navigate this space.”

The review states, “The refugee crisis is opening new opportunities” for “coordination and collaboration” with other wealthy donors.

It is almost as if Europe’s refugee crisis was planned and prepared, not just by the Soros organization, but others who would benefit from a shift in the change of regional “migration governance”, i.e., the reimposition of sovereignty terms, as Greece found out the hard way several months ago when its sovereignty was relegated to the country’s willingness to participate in Europe’s refugee scheme.

It will hardly come as a surprise that according to the review, immigration policy-makers need to accept the refugee crisis as a “new normal.” One of the conclusions listed in the memo is, “Accepting the current crisis as the new normal and moving beyond the need to react.”

“Observing our partners as they respond and adjust to the new reality in light of the crisis in Europe and the Mediterranean, we see little attention given to long-term planning or fundamentally new approaches to advocacy.”

The conclusion also stresses the need to fight back against “growing intolerance toward migrants.” It is unclear just how Soros plans on “fighting back.”

Needless to say, in order to promote its European refugee agenda, the Soros organization needs close European allies. Conveniently, it has a memo prepared just for that titled “Reliable allies in the European Parliament (2014 – 2019)” in which it notes the importance of building “lasting and trustworthy” relationships with European MEPs “likely to support Open Society’s work.”

It spans 11 committees and 26 delegations, as well as the European Parliament’s highest decisionmaking bodies: 226 MEPs who are proven or likely Open Society allies.

The presence of an MEP in this mapping indicates that they are likely to support Open Society’s work. They should be approached with an open mind: although they will most likely want to work on areas they’re already interested in, they could also welcome hearing about new issues.

Beyond discussing individual topics, Open Society should seek to build lasting and trustworthy relationships with these European lawmakers.

Aside from Europe’s refugee crisis, the data leak provides other important glimpses in Soros’ influence of global affairs.

One memo, which is an overview of the “Ukraine Media Project”  exposes how Soros influences media coverage of events in Ukraine, something previously touched upon in a June 2015 post titled “Hacked Emails Expose George Soros As Ukraine Puppet-Master.”

In the memo which reveals how Soros hopes to “cover” events in Ukraine, the authors admit that “this isn’t proper independent journalism and we may damage our credibility with journalists”  and admit that “journalists may produce stories that have no relevance for the narrative we seek to inform or stories that are counterproductive (enforcing narratives of fascism etc.)”

offer them long stay reporting trips in Ukraine. Rather than specify what they should write about they should make suggestions for articles; we retain a veto on stories we think are counterproductive. Suggestion that we liaise directly with journalists to determine interest.

Credibility: the “veto” approach means this isn’t proper independent journalism and we may damage our credibility with journalists
Control: Journalists may produce stories that have no relevance for the narrative we seek to inform or stories that are counterproductive (enforcing narratives of fascism etc.)
Interference: however nuanced this is packaged, we may enforce the narrative of GS/OSF manipulation
Placement: publication of the articles is not guaranteed and presents a significant barrier to success

We then turn our attention to the US, where we we find a memo that “provides a brief overview of state/local funding by U.S. Programs in the last three years.”

Throughout its 15-year history, U.S. Programs has complemented its national work with state and local grantmaking. The Emma Lazarus Fund, the Southern Initiative, the Program on Reproductive Health and Rights, and the Youth Initiative all had a strong presence in states like Louisiana, North Carolina, Texas, New York, and California. In this way, U.S. Programs has not only advanced core priority issues at the national level, but it has also worked to enable local and state actors to play a more critical role in shaping discussions around criminal justice, drug policy, immigrants’ rights, government security, and other key issues at the state level.

The memo indirectly hints at Soros funding for BLM:

To provide support to the Baltimore Education Research Consortium, including for the creation of an executive director position/$196,000/OSI-Baltimore/2009

To support the American Journalism Review’s series of articles on the crisis in American journalism with a focus on, among other things, coverage of federal agencies and state governments, including Maryland /$200,000/Strategic Opportunities Fund/2009

Furthermore, here is confirmation of Soros’ funding and support for Social Justice organizations, taken from a memo revealing the “Democracy and Power Fund“, which explains its desire for building “state-based power”

Advance social justice in critical states through state-based issue advocacy and organizing where the opportunities to advance (or the threats to) open society are particularly significant.

It is almost surprising how cheap control over SWJ causes is. 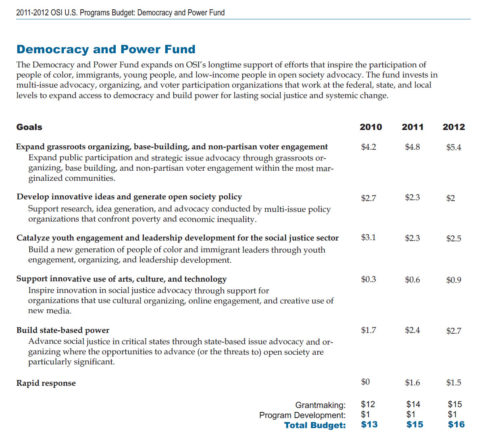 Another memo provides further details on the funding of an additional five organizations, including the infamous La Raza. 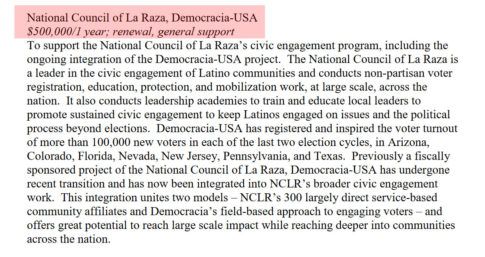 Among the leaks we also find a document on the Center for American Progress, or CAP, whose purpose is “To support the Examining Anti-Muslim Bigotry Project.” We are confident various conservative organization will be curious about this because as part of its activities the CAP is expected to “research and track the activities of the most prominent drivers of Islamophobia” including Pamela Geller, Frank Gaffney, David Howoritz, Robert Spencer, Cliff May, Liz Cheney and so forth:

CAP’s first step will be to interview and engage in the Project the journalists, researchers, academics, and leaders in the anti-hate movement who are researching and writing on Islamophobia, and to develop a roster of knowledgeable and credible experts to whom journalists and policymakers can turn for information. As part of this process, CAP will reach out to Media Matters for America, FAIR, the Muslim Public Affairs Council, the American Muslim Civic Leadership Institute, Muslim Advocates, the Interfaith Center of New York, the Southern Poverty Law Center, and the cohort of emerging Muslim leaders in CAP’s Young Muslim American Voices Project that is run by CAP’s Faith and Progressive Policy Institute.

CAP will research and track the activities of the most prominent drivers of Islamophobia, including Stop Islamization of America, led by Pamela Geller; the Center for Security Policy, led by Frank Gaffney; David Horowitz’s Freedom Center, which sponsors Robert Spencer’s Jihad Watch; the Middle East Forum, led by Daniel Pipes; the Foundation for Defense of Democracies, led by Cliff May; and Keep America Safe, led by Liz Cheney. In addition, CAP will examine the role played by right-wing media, the Tea Party movement, prominent politicians, pundits, and conservative donors in spreading anti-Muslim hysteria. This research will form the basis of a CAP audit of Islamophobic activities that will inform a strategy convening of around two dozen researchers and advocates, including representatives of progressive organizations and the AMEMSA community. Participants will be asked to formulate strategies for combating anti-Muslim bigotry. The convening is planned for the first quarter of 2011.

We continue to dig through the filings for further ties, financial or otherwise, between Soros and the various branches of the US government as well as the 4th estate. 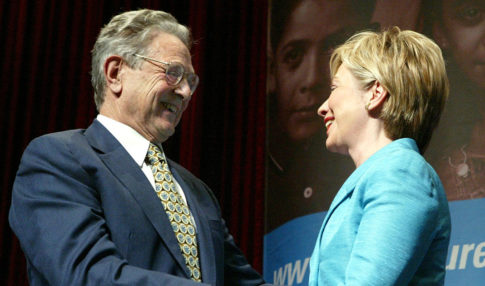