Money soon became worthless. We returned to an exchange. For a tin can of tushonka (think Soviet spam), you could have a woman. (It is hard to speak of it, but it is true.) Most of the women who sold themselves were desperate mothers.

Arms, ammunition, candles, lighters, antibiotics, gasoline, batteries and food. We fought for these things like animals. In these situations, it all changes. Men become monsters. It was disgusting. 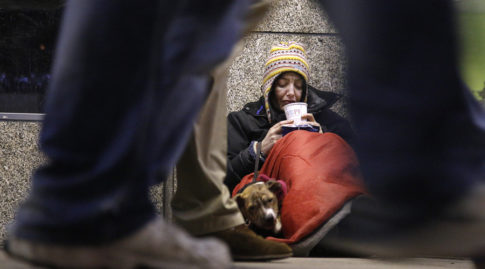 Online advertisements are offering free accommodation to vulnerable homeless women, as long as they are “stunning” and can prove their attractiveness with a picture, a British charity has warned.

Posted on Craigslist, the “sordid” ads are “targeting desperate women who feel they have no other options – and women who may already have experienced sexual or domestic violence,” homelessness charity Shelter said in a statement.

There are hundreds of listings on the site, some of which boldly state that women will be given free accommodation if they’re prepared to return the favor in the form of sex. The ads vary from explicit sexual demands to implied intentions.

“If any young female student is in need of free of charge accommodation and is prepared to act as a ‘resource’ in return, then please provide full personal details and a recent pic and reply from your own private email address please. No pic, no reply,” one ad states.

Another explicitly states that only “stunning” women need apply.

Shelter called the ads a “dangerous attempt to establish deeply exploitative relationships off the back of homelessness,” noting that the charity sees cases of people trying to exploit the British housing crisis every day.

Moreover, the charity noted that many of those targeted in the ads may have already experienced sexual or domestic violence in the past, and noted a unique danger in the current notices.

“Women are being asked to enter a space which is entirely controlled by someone else, a person who always has the right to be there, who can say who else can enter the property and on whom they are entirely dependent for shelter,” the charity said.

“This is the vile exploitation proposed by these adverts: that women who feel they have no choice enter an arrangement where they feel they never have the choice to say no,” Shelter added.

Although the charity noted there is no evidence that women have responded to the ads, it did say “it seems a tangible risk that some lead to these arrangements being established,” due to the fact there are so many on the site. At the time the statement was written, there were 288 free accommodation listings and 51 for under £10 (US$13) a month.

Noting that there are numerous issues at play, many of which are “beyond Shelter’s area of particular expertise,” the charity said it is undeniable that part of the problem is the UK’s housing crisis.

“Because while it is a story of men trying to exploit women, the thing that makes that exploitation possible is unaffordable housing and lack of appropriate support services and move on accommodation for those who do find themselves homeless,” Shelter wrote.

“High housing costs don’t make these particular exploitative relationships inevitable…but not being able to afford shelter drives people to desperation – and when people are desperate, some kind of exploitation and misery is certain,” the charity concluded.