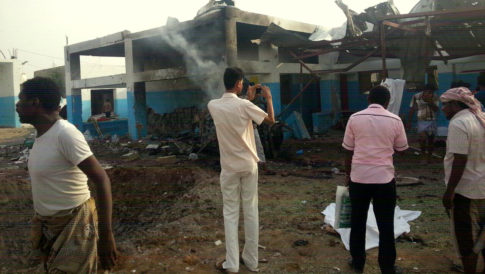 Already facing growing criticism from yesterday’s attack on a school in the Saada Province, Saudi Arabia appears to have doubled-down on its air campaign against the north, bombing a Doctors Without Borders (MSF) hospital in the Hajjah Province, and killing 15 more civilians.

MSF confirmed the attack, saying that three of their staff members were killed, and that three foreign doctors volunteering at the hospital were among the wounded. This was the fourth airstrike against an MSF facility in Yemen in the past 12 months.

MSF reported that the GPS location of the hospital had been shared with the Saudis, and that its location was well known. Despite this, after the hospital was bombed, rescue workers struggled to reach the site, as warplanes continued to fly overhead, raising fears of additional strikes.

“The violence in #Yemen is having a disproportionate burden on civilians.” #NotATarget https://t.co/U2gQHSJ4ex pic.twitter.com/Lx1LoX6Tdb

The State Department expressed concern about the attack on the hospital, but dismissed reporters’ questions about possibly backing down on massive US support for the Saudi air war, suggesting that the US isn’t going to make this attack a serious deal, anymore than their “concern” about the previous Saudi airstrikes and the huge civilian death toll that has resulted.