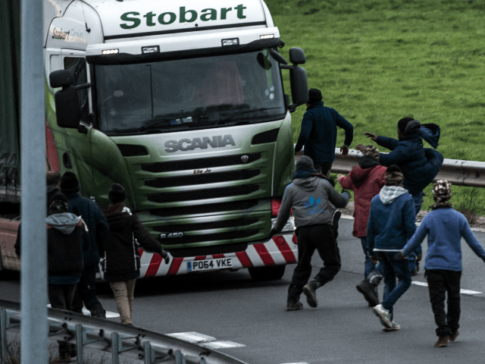 The number of lorry drivers fined for carrying illegal migrants in their vehicles has risen to record levels as the migrant crisis deepens in northern France.

Hauliers can be fined up to £2,000 for every person found stowing away on their vehicle at a British port, even if they were unaware of their presence on board.

Now, law firm Nockolds has obtained figures from the Home Office showing the number of truck drivers who received fines rose from 2,352 in 2014-15 to 3,151 a year later – a rate of nearly 40 fixed penalties a day.

The Freight Transport Association said that people smugglers are becoming increasingly sophisticated in hiding migrants on trucks heading from France to the UK.

One truck driver, Tony Henderson of haulier firm Blair Transport, told the Times that his vehicle’s lock and seal had been removed and then carefully replaced by people smugglers so that ten migrants could stow away inside.

“This was organised people smuggling. They knew what they were doing,” he added.

A Home Office spokesman said: “It is in all our interests to combat attempts to enter the UK illegally, which can damage the haulage industry financially and place the safety of drivers at risk. That is why we have invested tens of millions of pounds to reinforce security.”

The figures come amid reports that migrants at the infamous Calais “jungle” are wielding weapons and smashing up cars while their owners sit in traffic.

Some local residents claim the migrants are attacking the vehicles “just for fun”, with one woman posting on Facebook a picture of her brother-in-law’s car, which had its windscreen, side mirror and rear window smashed.

“You’re leaving work and then you’re attacked by migrant sh*ts just for fun,” she said. “It disgusts me!”