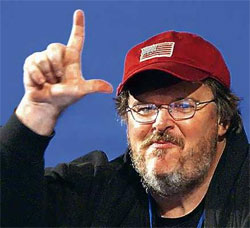 – Michael Moore: “Trump Never Wanted To Be President, I Know This For A Fact”:

Despite proclaiming five reasons why Trump will win just a month ago, Michael Moore has apparently had a change of heart and has posted an op-ed in the Huffington Post today describing, in detail, why he believes Trump is blowing up his own campaign and it’s only a matter of time before he exits the race.  In short, Moore points out that he knows “for a fact” that Trump “never actually wanted to be President of the United States.”  After all, as Moore points out, being President is “WORK” and you have to live in the “GHETTO” of Washington DC in a small, two-story house…and “a “second floor” is not a penthouse!”

Instead, Moore says the whole thing was a stunt to get more money out of NBC for his TV show, “The Apprentice.”  Why else, Moore asks, would someone launch a Presidential campaign with no major staff commitments or campaign infrastructure in place unless they had no intention of ever winning.

So, on June 16 of last year, he rode down his golden escalator and opened his mouth. With no campaign staff, no 50-state campaign infrastructure — neither of which he needed because, remember, this wasn’t going to be a real campaign.

But the plan all blew up when Trump went “off the rails” and NBC responded, not by offering him more money, but by cancelling his shows instead.

…he went off the rails at his kick-off press conference, calling Mexicans “rapists” and “drug dealers” and pledging to build a wall to keep them all out. Jaws in the room were agape. His comments were so offensive, NBC, far from offering him a bigger paycheck, immediately fired him with this terse statement: “Due to the recent derogatory statements by Donald Trump regarding immigrants, NBCUniversal is ending its business relationship with Mr. Trump.” NBC said it was also canceling the beauty pageants owned by Trump: Miss USA and Miss Universe. BOOM.

Unfortunately, according to Moore, Trump was forced to stay in the race and actually win the Republican nomination because it just took longer for the electorate to turn on him than he expected.  But soon his “karma caught up with him”:

Calling Mexicans “rapists” should have disqualified him on Day One (or for saying Obama wasn’t born here, as he did in 2011). No, it took 13 months of racist, sexist, stupid comments before he finally undid himself with the trifecta of attacking the family of a slain soldier, ridiculing the Purple Heart and suggesting that the pro-gun crowd assassinate Hillary Clinton.

And now Moore believes Trump will do whatever necessary to blow up his chances of ever being President because he would rather look like a fool now than to be declared a “LOSER” on election day.

Because, unless he is just “crazy,” the only explanation for the unusual ramping up, day after day, of one disgustingly reckless statement after another is that he’s doing it consciously (or subconsciously) so that he’ll have to bow out or blame “others” for forcing him out. Many now are sensing the end game here because they know Trump seriously doesn’t want to do the actual job — and, most importantly, he cannot and WILL NOT suffer through being officially and legally declared a loser — LOSER! — on the night of November 8th.

Trust me, I’ve met the guy. Spent an afternoon with him. He would rather invite the Clintons AND the Obamas to his next wedding than have that scarlet letter (“L”) branded on his forehead seconds after the last polls have closed on that night, the evening of the final episode of the permanently cancelled Donald Trump Shit-Show.

And finally, not one to forego taking one last shot at the Republican Party, Moore offers some comfort to Trump explaining that none of this is actually his fault but rather he is just the “logical conclusion to a party that has lived off the currency of racism and bigotry and fellating the 1 percent for decades.”

1 thought on “Michael Moore: “Trump Never Wanted To Be President, I Know This For A Fact””