Earlier today, the German Bundesbank, in its monthly report had some good and some not so good news.

The good news was that, at least for now, the German economy is not being impacted by Brexit. This, however, will change as the facts suit the central bank, and especially if and when a convenient scapegoat is needed should German GDP suddenly sink.

The not so good news was that German central bank also quietly proposed raising the legal retirement age to 69 by 2060. Confirming that Germany will certainly not be immune from the financial repression that has crushed pension funds across the globe as a result of ZIRP and NIRP, the Bundesbank said that recent reforms won’t protect citizens from a drop in the level of pension payments from 2050. 2060 is just a placeholder: citizens who don’t opt for state-supported private insurance may face shortfalls a lot sooner. And they will. Worse, if low interest rates persist, and according to John Williams earlier today they will, available provisions could be further pressured.

Yet in a twist, it appears the biggest underfunding problem is not so much related to depressed interest rates, as one of simple demographics: according to the bank, while higher premiums could theoretically keep payouts stable, they would “raise the strain on those paying the contributions, and an increasing, high burden of payments overall has negative consequences on economic development.” To avoid that, “the legal retirement age ultimately needs to be adjusted.” 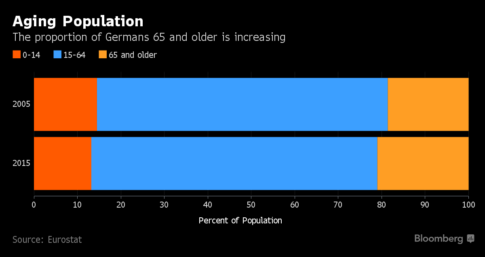 According to Bloomberg, the Bundesbank said the government’s current plans that include raising the retirement age to 67 by 2030 and increasing contributions don’t account for the fact that the ratio of retirees to contributors is set to widen further. Increasing life expectancy means retirees will draw from pension funds for a longer period of time, and a generation of baby boomers that retires post-2030 means there will be more pensioners to take care of per working adult, while birth rates remain low, according to the report. Which, incidentally, explains Merkel’s infatuation with getting millions of refugees inside Germany: to push the birth rate higher. If only it wasn’t for those suicide bombers screwing up the calculation.

“Amid demographic change, the parameters of a contribution-based pension system can’t all be kept stable,” the Bundesbank said. “Confidence in pension insurance could be strengthened and uncertainty about financial stability at old age could be decreased if it were made clear how the parameters of retirement age, provision levels, and contribution rates can be adjusted in the long term.”

Of course, there is a far simpler, if rather radical solution: war, and/or wiping out a sizable portion of the German population.

The current favourable situation of the statutory pension insurance scheme masks the fact that it will face substantial strains in future from demographic challenges. Official costing forecasts should extend beyond the year 2030 in order to identify long- term trends that will determine funding requirements. Public trust in the statutory pension insurance scheme could be strengthened and uncertainty about financial security in old age allayed if policymakers were to spell out the likely long- term rules for adjusting the pension scheme’s key parameters of retirement age, pension level and contribution rate from today’s perspective. The official calculations currently fail to take adequate accountof the prolongation of the average working life induced by the progressive raising of the statutory retirement age to 67, with the result that the likely future pension- to- earnings ratio is increasingly understated along the time axis by current projections. In fact, policymakers wold be well advised to revisit the issues of a longer working life and a higher statutory retirement age. The incremental raising of the statutory retirement age to 67 by the year 2029 will largely stabilise the balance between the respective average duration of the retirement phase and of the contribution phase up to that time, albeit at an historically high level. It would make sense to extend this stabilisation concept beyond 2029. From today’s vantage point, this implies a graduated increase in the retirement age to approximately 69 by the year 2060. Even on this basis the contribution rate would probably rise to around 24%, while the pension- to- earnings level provided by the statutory pension insurance scheme would fall to around 44%. However, supplementary savings under voluntary private pension plans could enable retirees to achieve a total pension income above the current level, even in the event of low market rates of return on investment.