Despite expectations that recent, better than expected global economic data (with several prominent setbacks, especially in US and Japanese GDP, as well as the recent Chinese data) which last week sent the Citi global economic surprise index to multi-year highs, would push global government yields at least modestly higher, that did not happen.  Instead, as the FT reports, the value of negative-yielding bonds – both government and corporate – swelled to $13.4 trillion this week up from $13.1 trillion last week, as negative interest rates and central bank bond buying ripple through the debt market.

About a quarter of the global economy now has negative interest rates.

“It’s surreal,” said Gregory Peters, senior investment officer at Prudential Fixed Income and Morgan Stanley’s former chief global asset strategist, who two months ago was one of the very few to predict the market’s reaction to Brexit when he said that the market was looking at it wrong and urging to “Buy US Assets In Case Of Brexit.” Regarding negative yields he added that “It’s clear that central banks are dominating markets. There’s a race to the bottom. Central banks are the main drivers of this, it’s not fundamental.”

The message from us at TwentyFour is that if you happen to own yield and you are confident in the solvency of the borrowers, then hold on to it. Yield is going to become ever more scarce, especially if the Fed fails in its mission to raise rates.

The chart below shows the relentless drop in global bond yields: 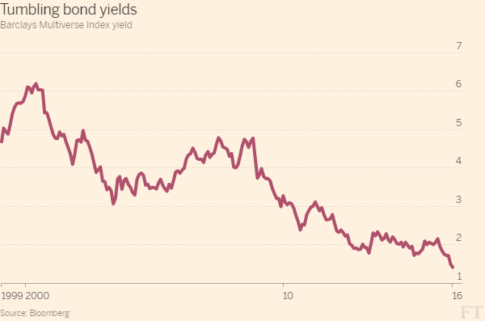 The Bank of England recently restarted its quantitative easing programme to combat the economic slowdown that is expected to follow the UK’s vote to leave the EU. Japan has already unveiled another dose of government spending, which underwhelmed investors, but some economists expect the US to loosen the reins after the presidential election in November, and a further easing back of austerity in the eurozone.

That has further squashed bond yields, and forced investors to scurry into emerging markets, which as we showed last week received the biggest inflow on record. 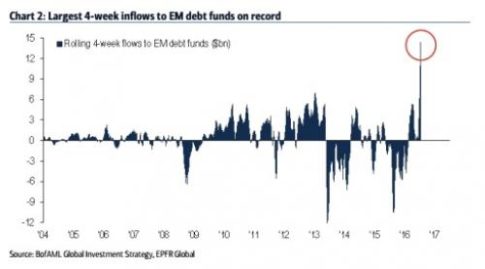 Likewise there has been a surge in buying of junk bonds and ultra-long dated government debt to snap up what little remains of potential returns. Ironically, as we noted yesterday, the biggest fear among credit investors in a recent BofA survey is that bonds are now in a bubble, something the underlying data confirms.

Money is also spilling into the global stock market, helping the FTSE All-World index to a 5.3 per cent gain this year and pushing all three main US equity indices to a “trifecta” of fresh records this week.

Some investors and analysts are starting to fret that the swelling universe of negative-yielding bonds is distorting global markets and causing more economic damage than gains. “There’s too much acceptance of this,” Mr Peters said. “We’re talking about it in a cavalier way, but that’s not appropriate. It’s extremely distortive, and if we see a pick-up on the fiscal side, or inflation, it will look less comfortable sitting in this negative yielding universe.”

Meanwhile, those who are talking about it have mostly good things to say: after all it is allowing an unprecedented bond issuance spree which is set to break records in both August, and YTD, as companies are set to plow even more billions into levered buybacks and dividends. 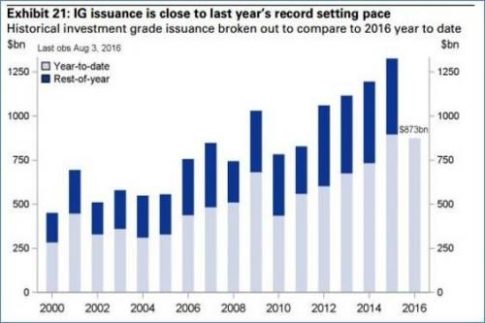 Exceptionally subdued borrowing costs and the underwhelming health of the global economy has sparked mounting speculation that countries will begin to ease fiscal policy, spending more money on infrastructure and cutting taxes to reinvigorate growth.

Cited by the FT, Michael Hartnett, Bank of America Merrill Lynch’s chief investment strategist, predicted that there would be a “fiscal flip” in the coming year. “The bigger picture narrative is the policy baton is passing from monetary to fiscal stimulus in 2016-17,” he wrote in a note to clients this week. “We are convinced that the flip from monetary to fiscal policy will drive asset allocation and asset prices in coming quarters.”

So far that has not happened.

Greg Peters also expected an inflection point on government spending in the coming year, driven by the need to reinvigorate economies and encouraged by exceptionally subdued government borrowing costs, which could reverse the slow ballooning of the sub-zero bond yield universe. “If you’re not going to unleash the fiscal hounds with negative rates, why bother? There needs to be more of a relenting of the fiscal reins,” he said. “If 2017 is more of a fiscal year then it makes negative yields more challenging.”

However, as we first explained two months ago, a spike in rates will prove painful for investors who are heavily invested in negative-yielding bonds, expecting that central bank bond-buying will continue to provide a backstop. Fitch Ratings estimated earlier this month that a rapid reversal of yields back to 2011 levels would cause theoretical market losses of up to $3.8 trillion.