– Islamic Islamophobia: When Muslims Are Not Muslim Enough, What Does It Promise For The Rest Of Us?

Submitted by Douglas Murray via The Gatestone Institute,

Earlier this year there was a murder that shocked Britain. Just before Easter, a 40-year old shopkeeper in Glasgow, Asad Shah, was repeatedly stabbed in his shop; he died in the road outside. The news immediately went out that this was a religiously-motivated attack. But the type of religiously motivated attack it was came as a surprise to most of Britain.

There is so much attention paid to the idea of “Islamophobia” in the country that many people — including some Muslim groups — immediately assumed that the killing of Asad Shah was an “Islamophobic” murder. It turned out, however, that the man who had been detained by police — and this week sentenced to a minimum of 27 years in prison for the murder — was also a Muslim.

Mr Shah was an Ahmadiyya Muslim — that is, a member of the peaceable Islamic sect which is dismissed as “heretical” by many Muslims. Mr Shah’s murderer, on the other hand, was a Sunni Muslim, Tanveer Ahmed, who had travelled up from Bradford to kill Mr Shah because he believed Mr Shah had “disrespected the Prophet Mohammed.” At this point the comfortable narratives of modern Britain began to fray. 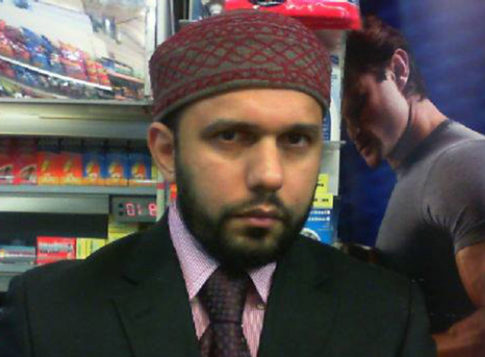 Asad Shah was murdered in Glasgow, Scotland by Tanveer Ahmed, a fellow Muslim who claimed Shah had “disrespected the Prophet Mohammed” by wishing Christians a Happy Easter.

While everyone would have known what to do, what to say and where to start hunting for connections if such an atrocity had been committed by a non-Muslim against a Muslim, politicians and others were uncertain what to do when it turned out to be a Muslim-on-Muslim crime. If, for instance, the crime, had been committed by a non-Muslim against a Muslim, political leaders such as Scotland’s First Minister, Nicola Sturgeon, would have immediately sought to trace links to anyone who had called for, or approved of, any such act. But beneath this murder lay a whole iceberg that Sturgeon and others have still shown no interest in investigating.

Usually after terrorist attacks, it is traditional for Sturgeon and other Scottish politicians to traipse off to the local mosque, to say that of course the attack has nothing to do with Islam, and otherwise to reassure the Scottish Muslim community. Yet the mosque most often frequented for this trip — and the largest mosque in Scotland — is the Glasgow Central Mosque. Sturgeon has met its leaders many times, including after the Paris attacks last November. Those leaders include Imam Maulana Habib Ur Rehman. Just a month before the killing of Mr Shah in Glasgow, this Glasgow Imam gave his response to the hanging in Pakistan of Mumtaz Qadri — the man who murdered Salman Taseer, the governor of Pakistan’s Punjab province, for his opposition to blasphemy laws.

Reacting to the hanging of Salman Taseer’s assassin, Imam Rehman said, among other things, “I cannot hide my pain today. A true Muslim was punished for doing which [sic] the collective will of the nation failed to carry out.” The statement is a pretty clear justification of the actions of Taseer’s assassin, and as close as you can get to advocating others carry out similar actions against people deemed to be outside a particular interpretation of Islam.

Of course, if Mr Shah’s murderer had been a non-Muslim, there would be a concerted effort by the entirety of the media and political class to find out what inspirations and associations the murderer had. Specifically, they would want to know if there was anybody — especially any figure of authority — who had ever, for instance, called for the murder of Muslim shopkeepers. Yet when a British Muslim kills another British Muslim for alleged “apostasy,” and local religious authorities are found to have praised or mourned the killers of people accused of “apostasy,” the same people cannot bother to stir themselves. There is talk of being “taken out of context” or there are warnings not to “generalise” or be “Islamophobic” or any number of other fatuous get-out clauses.

What happened this week in court when Tanveer Ahmed was found guilty and sentenced for the murder of Asad Shah was even more revealing. After the judge read out the sentence, Tanveer Ahmed raised his fist and started shouting in Arabic “There is only one prophet.” Supporters, who made up around half the people in the public gallery, joined in with his cries. All of which made it understandable that the family of Mr Shah had been too terrified to turn up in court during the trial of their relative’s murderer, and are apparently planning to leave Scotland.

Then, outside the court, a news reporter from LBC Radio confronted some of the murderer’s family members. The video is worth watching. “Did Asad Shah deserve to die?” he asks the killer’s family as they head to their car. They refuse to comment.

????WATCH: Confronting murderer Tanveer Ahmed’s family after he shouted “There is only 1 Prophet” in the dock #AsadShahpic.twitter.com/pdkNhmAOFs

When another supporter is asked whether he thinks it was “respectful” for the killer to do the chanting he did in the dock, he becomes threatening and says, “Yeah, he’s respecting his prophet. He’s saying ‘I love my prophet’. What’s wrong with that?” Asked if he thinks the sentence was fair, the man replies “No.” Asked in what way, he replies, “No comment.”

It is, of course, a good thing that the criminal justice system has done its job and done it swiftly. Asad Shah’s murderer has been brought to justice and been given a suitably long sentence. But this case should have provided a learning moment for politicians, the media and wider society to finally understand the full threat to our society that this type of fanaticism poses, as well as a realistic awareness of how widespread that fanaticism actually is. Instead, on glimpsing for a moment how deeply this problem goes, it seems that the UK has decided once again to turn away and avert its gaze, for fear of what it might otherwise find out.