Having previously warned that Hillary “is often confused,” Clinton’s top aide, Huma Abedin – previously best known for standing by her husband Anthony Weiner after his sexting scandal – is now at the center of the Clinton Foundation – State Department debacle. As Bloomberg reports, for the final eight months of Clinton’s reign as Secretary of State, Abedin worked for both The Clinton Foundation and as a “special government employee” at The State Department. 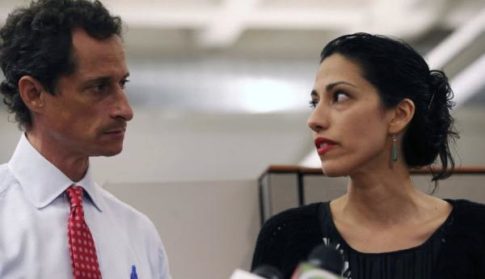 And then, as we previously noted, Abedin gained some more infamy for admitting about Hillary that “she’s often confused”… 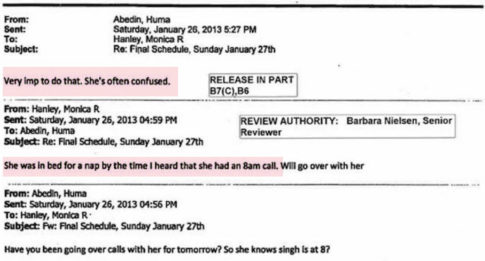 But, as Bloomberg now reports,Abedin’s overlapping jobs bring a renewed focus on Clinton’s conflicts of interest while at the State Department…

Huma Abedin stepped down from her post as deputy chief of staff at the State Department and Hillary Clinton’s ever-present personal assistant on June 3, 2012. Only she didn’t really leave.

Instead, in a reverse twist on a program intended to bring talented outsiders into government, Abedin was immediately rehired as a “special government employee.” She also took paying jobs with the Clinton Foundation and Teneo Holdings, a consulting firm with international clients that was co-founded by a foundation official who also was Bill Clinton’s long-time personal aide.

Abedin’s multitasking in the final eight months of Hillary Clinton’s time as the top U.S. diplomat — and her role as intermediary for some of the same players before that — are drawing renewed scrutiny after a conservative watchdog group’s release last week of a new batch of e-mails to and from Clinton aides. Abedin has become the personification of an election-year debate over whether the nonprofit foundation will create conflicts of interest if Clinton wins the White House.

Clinton was rated trustworthy by just 41 percent of likely voters in a Bloomberg Politics national poll conducted Aug. 5-8. More than half said that the Clinton Foundation’s acceptance of foreign contributions while she was secretary of state bothers them “a lot.”

“The Clinton Foundation for Hillary Clinton is kind of a walking conflict-of-interest problem,” Meredith McGehee, policy director for the nonpartisan Campaign Legal Center, said in an interview. “Clearly this notion that it could continue to operate while she was secretary of state — it was a built-in problem. If you’re really looking at what should happen if she’s elected, neither her husband nor her daughter, certainly no relative, should have any connection with the foundation.”…

When Clinton was awaiting confirmation as President Barack Obama’s secretary of state in 2009, she wrote a letter to the State Department’s chief ethics officer promising that she wouldn’t “participate personally and substantially in any particular matter that has a direct and predictable effect upon this foundation, unless I first obtain a written waiver or qualify for a regulatory exemption.”

But that “did not preclude other State Department officials from having contact with the Clinton Foundation staff,” just as they “are regularly in touch with a wide variety of outside individuals and organizations,” department spokeswoman Elizabeth Trudeau told reporters last week.

That’s where Abedin came in.

Abedin’s arrangement as a “special government employee” has been challenged since 2013 by Republican Senator Chuck Grassley of Iowa, who has questioned whether she was overpaid and wrote her that “you allegedly sent or received approximately 7,300 emails on your official Department of State address that involved Mr. Douglas Band,” the Bill Clinton aide and Clinton Foundation official who co-founded Teneo.

In a 2013 letter to State Department officials, Abedin said she left her full-time post because “the birth of my son in December 2011 led me to decide to spend the bulk of my time in New York City where my family lived.” She said she stayed on as an hourly employee working for “the Secretary of State in her personal capacity to help prepare for her transition from public service.”

Abedin wrote that she provided “strategic advice” to Teneo’s management team but never did “any work on Teneo’s behalf before the department” nor provided information from government sources to help its clients make investment decisions, as Republicans had suggested.

Abedin’s arrangement was questioned in a 2013 civil lawsuit by Judicial Watch, the conservative watchdog group, which pressed for documents under the Freedom of Information Act. After Clinton’s use of a private e-mail server when she was secretary of state became public, the group got the the case reopened and has been obtaining — and publicizing — a steady barrage of e-mails and deposition transcripts on the e-mail system and other topics.

Last week, Judicial Watch produced e-mails including a 2009 exchange in which Band wrote Abedin that it was “important to take care of” an individual, whose name was redacted. Abedin replied that “personnel has been sending him options.”

In another 2009 exchange, Band asked Abedin and Cheryl Mills, Clinton’s chief of staff, to put Lebanese-Nigerian billionaire Gilbert Chagoury in touch with a State Department “substance person” on Lebanon. The Chagoury Group co-founder has given between $1 million and $5 million to the Clinton Foundation, according to a list of donors posted online.

The debate over the Clinton Foundation simply shows “the way Washington works,” said Scott Amey, general counsel at the Project on Government Oversight.

“It’s instances like this that cause the public to have a negative view of how our government works, and it really gives people the impression that deals are done in back rooms and based on who you know rather than what you know,” Amey said in an interview.

While Abedin hasn’t said whether she’d return to Washington and the White House to serve again in a Clinton administration, the Clintons have acknowledged that they would have to forge a new relationship with the foundation they started. But they haven’t provided details.