The Clinton campaign is launching a new program that will encourage America’s 730,000 DREAMers to vote…without actually voting, of course, because that would be illegal.  But now that we think about it so is immigrating to a foreign country without proper documentation.  But we digress.

The new program enlists DREAMers (aka illegal immigrants…you have to admire the Democrat marketing efforts) to register “friends, families, co-workers or classmates” to vote so they can have a positive impact on the election in spite of not being able to directly participate.  Hey why vote once when you could vote multiple times through surrogates?

Per The Hill, the program, aptly titled “Mi Sueño, Tu Voto” (My Dream, Your Vote), is a “get out the vote effort” coordinated by DREAMers so that “one by one — through friends, families, co-workers or classmates — DREAMers’ futures would be considered on Election day.”

“DREAMers have played a pivotal role in our campaign, advocating for families who constantly live in fear of deportation — so we’ve created a program that aims to turn these stories into action,” said Lorella Praeli, Clinton’s national director of the Latino Vote in a statement.

“We may not have the right to vote, but ‘Mi Sueño, Tu Voto’ will help ensure that our stories are heard and it will  send a clear signal to Donald Trump that we cannot be silenced,” said Astrid Silva.

Silva is an undocumented immigrant from Las Vegas who was brought to the United States as a child and spoke about her journey at the Democratic National Convention last month.

As an added little perk, part of the program’s mission will also be to remind voters of “Donald Trump’s hateful and dangerous agenda.”  As a reminder, Trump has promised revoke Obama’s executive orders on DREAMers within his first 100 days in office calling them the “most unconstitutional actions ever undertaken by a president.”  We can see why that stance might be unpalatable.

We can think of no better way to indoctrinate young DREAMers to the American way of life than by allowing them to be exploited by a Clinton and coerced into engaging in divisive politics while leading them to believe their efforts truly matter.  Welcome to America…you’re truly one of us now.

Finally, we are reminded of what happened last year when an undocumented immigrant interrupted Democratic presidential candidate Hilary Clinton at an award presentation to Chef Jose Andres at the annual Congressional Hispanic Caucus Institute gala in Washington, D.C. on Thursday night.

“Hillary, we’re watching,” 22-year-old Juan Carlos Ramos shouted as Clinton continued unfazed with her introductory speech about Chef Andres. “My deportation will be your funding.”

Ramos, a member of the immigrant advocacy group United We Dream Action, urged Clinton to stop receiving donations from the Corrections Corporation of America and The Geo Group, two of the largest private prison operators of immigrant detention facilities nationwide. 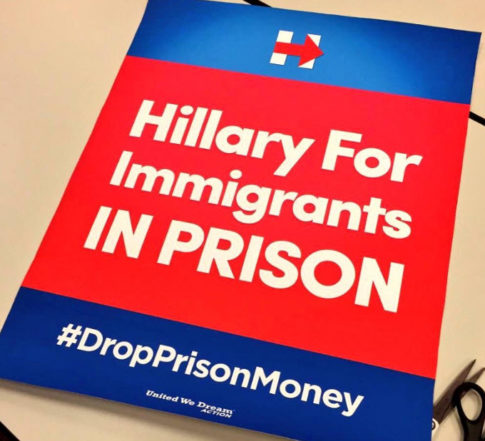 “Our message to Hillary Clinton is simple: immigrant youth do not trust you,” Ramos said in a press statement. “It is time to drop the prison money and stand with our community?—?you can’t have it both ways. Each dollar of private prison money accepted by the Clinton campaign undermines her pro-immigrant policy promises, and our community will not be fooled.”