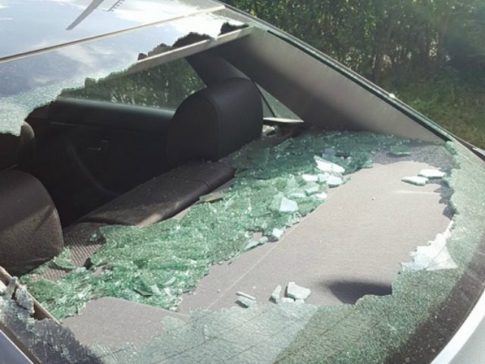 – Calais Locals Warned to Stay Away from Main Roads As Migrants Smash Vehicles:

Migrants wielding bats and knives have been smashing up vehicles on roads near Calais as their owners sit in traffic, reportedly “just for fun”. Local residents are warning others to avoid the area, saying that the migrants are not even checking to see whether children are in the vehicles before they set upon them.

One resident has posted pictures to Facebook of her brother-in-law’s car, which sustained more than €500 worth of damage when over a dozen migrants set about it with bats, completely smashing a side mirror and the rear window, and shattering the windscreen.

“You’re leaving work and then you’re attacked by migrant shits just for fun – it disgusts me!” commented Maëva Mayla, in a post which has been shared by more than 6,000 people.

“Tell your relatives so that they can avoid it happening to them,” she advises, before appealing for others who have experienced similar attacks to come forward so that they could mount a joint compensation claim.

A number of people have left comments of support, and expressing anger at the situation in Calais. Nathalie Brioit said it is “a shame they have all the rights,” while Marine Gabrielle confessed “I no longer use the highway as I’m so scared.”

The damage comes just weeks after lorry drivers using the route warned yet again that it is only a matter of time before someone is killed by a migrant. In early August a driver was threatened by a migrant wielding a chainsaw during a night of violence which also saw lorries burned out.

Despite French politicians repeatedly promising to cap the population of the nearby Jungle migrant camp at 2,000 people, including around 400 children, the camp has now spiralled to a population of nearly 9,000 migrants, making the encampment the third largest ‘town’ in the region. Thousands more are camped at nearby Dunkirk in a bid to make the crossing into England without falling foul of local authorities.

As the population has grown, tensions within the camp have also risen. Sami, an Eritrean migrant who has been living in The Jungle for six months, told local paper Nord Littoral: “There are people who come from different countries who do not speak the same language. That creates tensions, particularly in the queues for food. I have seen conflicts start there; you’re more likely to get meal if you’re big and strong.”

Three weeks ago an Eritrean man was hacked to death and six others badly wounded as migrants ran riot throughout the camp, staging running battles fought with knives and bats between gangs of Afghans and Africans throughout the night.