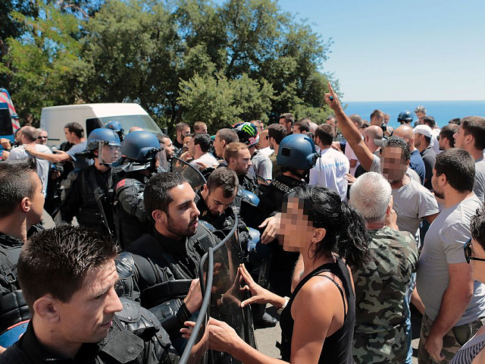 – African Migrants Brawl with Locals on French Island of Corsica:

Tense relations between locals and North African migrants led to a violent skirmish between members of the two groups this weekend on the French island of Corsica, leading to several injuries and torched vehicles.

Authorities had to deploy some 100 police officers and firefighters to the small resort town of Sisco to try to restore order after a conflict grew out of hand, moving quickly from strong words to violence. In the end, the use of tear gas was necessary to stop the riot.

Witnesses claimed that an argument broke out Saturday evening when some tourists took a picture of a group of three families of North African Muslims sitting on a beach, with their women all wearing veils. The North Africans vocally objected to being photographed, and then a group of Corsicans arrived and began quarrelling with the migrants.

As the fight continued, a crowd of dozens of local inhabitants gathered and some started throwing stones and bottles, and three vehicles presumably belonging to the North Africans were set on fire.

In the violence that ensued, two Corsicans were wounded, with one being stabbed in the ribs by a spear, and three Africans were injured as well, including a pregnant woman. The five injured people were taken to the hospital but subsequently released.

The French Interior Ministry confirmed that the incident had taken place, but didn’t specify the nationality of the people attacked, simply calling them “foreigners.”

“Four people injured, including a pregnant woman, were evacuated to the hospital in Bastia,” the ministry said in a statement, adding that “three vehicles were burned, causing severe traffic disruption.”

French Interior Minister Bernard Cazeneuve condemned the violence, saying that he would mobilize all his forces to investigate into the incident, promising to get to the bottom of these “intolerable acts” and punish those responsible.

In a statement, the minister also urged citizens to remain calm so as to “avoid any escalation” of the events, and to assume “a sense of responsibility.”