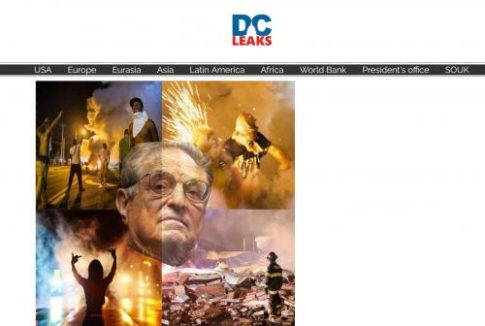 Last Thursday, as Bloomberg was gingerly setting the stage, and the preemptive damage control for what was about to be a historic leak, it did everything in its power to deflect attention from the key topic, namely that prominent liberal billionaire and Hillary supporter, George Soros had been hacked and countless documents were about to be leaked, and instead focus on the alleged identity of the hackers, the so-called DCLeaks, which – like all other “experts” – it positioned as yet another Russian government-sponsored operation.

To this we had one retort: “Far more important than the inane speculation on the hackers’ identity, is the now official disclosure – and warning – that Soros himself was hacked. Bloomberg writes that Open Society Foundations, the Soros group, reported the breach to the Federal Bureau of Investigation in June, according to spokeswoman Laura Silber, who added that an investigation by a security firm found the intrusion was limited to an intranet system used by board members, staff and foundation partners.”

And, sure enough, over the weekend that is precisely what DCLeaks revealed as it disclosed over two thousand internal documents from groups run by George Soros were leaked online Saturday after hackers infiltrated the groups. The 2,576 files were released by DCLeaks, a website which claims to be “launched by the American hacktivists who respect and appreciate freedom of speech, human rights and government of the people.”

The documents are from multiple departments of Soros’ organizations. Soros’ the Open Society Foundations seems to be the group with the most documents in the leak. Files come from sections representing almost all geographical regions in the world, from the USA, to Europe, Eurasia, Asia, Latin, America, Africa, the World Bank “the President’s Office”, as well as an unknown entity named SOUK. As the Daily Caller notes, there are documents dating from at least 2008 to 2016.

Documents in the leak range from research papers such as “EUROPEAN CRISIS: Key Developments of the Past 48 Hours” focusing on the impact of the refugee crisis, to a document titled “The Ukraine debate in Germany“, to an update specific financials of grants.

They reveal work plans, strategies, priorities and other activities by Soros, and include reports on European elections, migration and asylum in Europe.

An email leaked by WikiLeaks earlier this week showed Soros had advised Hillary Clinton during her tenure as Secretary of State on how to handle unrest in Albania – advice she acted on.

As part of the disclosure, DCLeaks said the following:

George Soros is a Hungarian-American business magnate, investor, philanthropist, political activist and author who is of Hungarian-Jewish ancestry and holds dual citizenship. He drives more than 50 global and regional programs and foundations. Soros is named as the architect and sponsor of almost every revolution and coup around the world for the last 25 years. Thanks to him and his puppets USA is thought to be a vampire, not a lighthouse of freedom and democracy. His slaves spill blood of millions and millions people just to make him even more rich. Soros is an oligarch sponsoring Democratic party, Hillary Clinton, hundreds of politicians all over the world. This website is designed to let everyone take a look at restricted documents of George Soros’ Open Society Foundation and related organisations. It represents workplans, strategies, priorities and other activities of Soros. These documents shed light on one of the most influential network operating worldwide.

We are currently going through the database of files and hope to highlight the more prominent ones in the near future.