– Chicago Records Deadliest Day In 13 Years As City Spirals Out Of Control:

Last week the Chicago Tribune pointed out that nearly 100 people had been shot in Chicago in less than a week.  9 people were killed on Monday alone marking the deadliest day for the city in 13 years.  Now, with weekend data out, turns out the story is even worse.  For the week ended 8/13, a total of 110 people were shot in Chicago with 24 of them killed.  YTD statistics indicate the city is spiraling out of control with total shootings up to 2,621, a mere ~50% YoY increase, with 445 total homicides.

The current homicide rate through August indicates the city is on pace for over 700 homicides in 2016, a 63% increase from 2015 (see chart below). 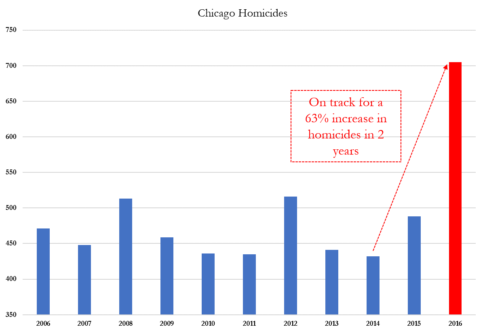 Below are a couple of stats from HeyJackass!  Daily shootings continue to average around 10-20.