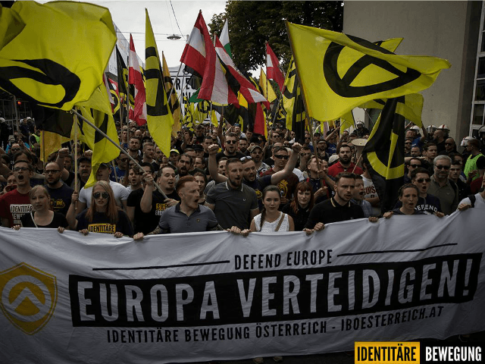 The head of the German domestic intelligence agency has confirmed that his agents are spying on the anti-mass migration Identitarian youth movement.

In a new revelation the chief of the Agency for the Protection of the Constitution, the German domestic spy agency, Hans-Georg Maassen has confirmed that his agents are actively spying on the hipster right wing movement. According to Mr Maasen, the movement is now active enough in real world protests to warrant being put on a government watch list. The intelligence chief also claimed that they had, “evidence of efforts against the free democratic basic order,”

The intelligence chief also claimed that they had “evidence of efforts against the free democratic basic order,” reports Zeit Online.

Part of the reason the intelligence services have a keen interest in the Identitarians, according to Mr Maasen, is their attitude toward Islamisation and toward mass migration. “Immigrants from the Middle East who are Islamic are defamed in an extremist way,” he said, regarding the various innovative protests the Identitarians have become famous for in France and Austria that have now come to Germany.

Mr Maasen also claimed that because the group consist of young people, generally aged 18-30, and that their videos are polished and emotionally charged, that the group could easily sway the opinions of the younger generation. “Young people are in a special way vulnerable. This is dangerous,” he claimed.

The Identitarians in Germany have been concerned not just with mass migration and Islamisation, but also with the ever-increasing government censorship of migrant critical comments online. The German government has raided several homes in the last few months due to social media posts they claim are anti-migrant, and sentenced many to fines and prison time.

The programme that reports many of these so-called “hate posts” works directly with a group known as the Amadeu Antonio foundation, who are headed by an ex-Stasi agent named Anetta Kahane. The Identitarians decided to visit the offices of Ms Kahane and her associates to protest their involvement with the censorship of speech online. Several members of the group donned Stasi uniforms and handed out leaflets to the staff.

The German branch of the movement reached out to Breitbart London to counter the claims made by Mr Maasen and were well aware of the irony of protesting Stasi tactics only days before being confirmed to be under surveillance themselves.

“We are alienated by the intelligence service’s announcement which stated that the Identitarian Movement is now being monitored nationwide,” they said adding: “We have always stressed that the Identitarian Movement confesses to democratic and constitutional values and condemns the use of violence. In addition, we point out the federal government’s violations of the constitution.”

the Identitarians also claimed that before they existed there were no peaceful avenues for patriotic European young people to express their displeasure with mass migration and Islamisation, insisting that they are a positive outlet for patriotic young people.

“Every people has the right to preserve their ethno-cultural identity. Every state preserves its sovereignty only by controlling its borders and choosing who may enter the country and who may not,” they said.

They concluded saying: “We are confident that everybody who informs himself on the goals and views of the Identitarian Movement will come to the conclusion that the alleged reasons for the monitoring by the intelligence service are not to be taken seriously and that they just serve as tools to oppress critical voices.”