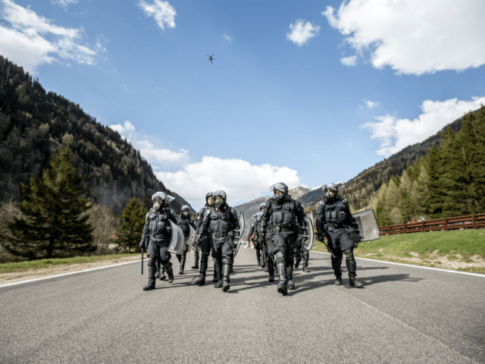 (REUTERS) – Austrian police said on Friday they are turning away four times as many illegal immigrants at the Brenner border crossing as in May due to tougher controls and more migrants heading for northern Europe from Italy.

“The situation for us is still relatively relaxed,” said Edelbert Kohler, deputy head of Tyrol police, in charge at the crossing. “But the recent developments in Italy are causing us a great deal of concern.”

More than 25,000 migrants, mainly from Nigeria and Ethiopia, arrived in Italy in July, 12 percent more than in the same period last year, EU border agency Frontex said on Friday.

Most of the more than 94,000 people who have arrived in Italy by boat this year travelled from sub-Saharan Africa to Libya where people smugglers, who have taken advantage of the breakdown of order there, charged them hundreds of dollars for the passage, often in unseaworthy boats.

After a clash at the Italian-French border, where migrants broke through police barriers, and as the number of migrants waiting to be let into Switzerland has been building up over the past days, Austrian authorities fear migrants could shift their routes as they try to reach wealthier northern Europe.

Police turned away 35-50 people who entered Austria illegally from Italy per day in July compared to about 10 a day in May, Kohler said.

Interior Minister Wolfgang Sobotka has been pushing for tough new immigration rules which would allow unsuccessful asylum seekers to be turned away at the border within an hour.

But Chancellor Christian Kern, whose Social Democrats govern together with Sobotka’s People’s Party as junior coalition partner, has so far rejected this and focussed on securing the borders of Austria’s neighbours.

Austria provides equipment and personnel to help countries like Hungary secure its borders. It also plans to support Serbia, Kern said on Friday.