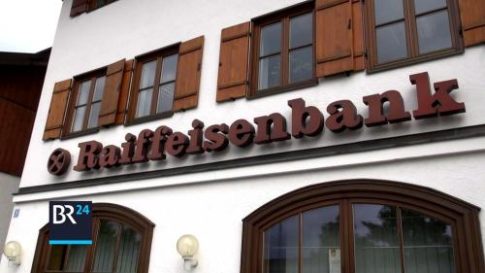 On June 5, 2014 when the ECB officially announced that the rate on its deposit facility would go negative, we posted “NIRP Has Arrived: Europe Officially Enters The “Monetary Twilight Zone.” However, while NIRP has already led to a dramatic upheaval across Europe’s economies as a result of a perfectly “unexpected” surge in the savings (as we warned would happen last October, and as the WSJ “discovered” last week) one key aspect of this “zone” was missing for the past two years: banks charging negative rates to ordinary, retail depositors.

However, after a two year wait, this final piece of the NIRP puzzle was revealed when earlier this week, Raiffeisen Gmund am Tegernsee, a German cooperative savings bank in the Bavarian village of Gmund am Tegernsee, with a population 5,767, finally gave in to the ECB’s monetary repression, and announced it’ll start charging retail customers to hold their cash.

Starting September, for savings in excess of €100,000 euros, the community’s Raiffeisen bank will charge a 0.4% rate. That represents the first direct pass through of the current level of the ECB’s negative deposit rate on to retail depositors.

“With our business clients there’s been a negative rate for quite some time, so why should it be any different for private individuals with big balances?,” Josef Paul, a board member of the bank, told Bloomberg by phone on Thursday.

The good news is that “as it looks today, charges on deposits won’t be extended to customers with lower amounts” than 100,000 euros. However, that may (and likely will) change at any moment.

Raiffeisen Gmund am Tegernsee may be a tiny bank that’s only introducing penalties to well-off customers, allegedly fewer than 140 will be affected, but in principle the ECB’s negative deposit rate was meant to encourage spending and investment in the euro area’s sluggish economy, not to tax thrifty Bavarians. A spokesman for the Frankfurt-based central bank declined to comment.

That, however, never happened, confirming once again just how clueless in gauging human behavior, and their “reaction function” (to use a trite central bank cliche) economists truly are.  Recall that as we reported in October of 2015, in the aftermath of NIRP “household savings rates have also risen. For Switzerland and Sweden this appears to have happened at the tail end of 2013. As the BIS have highlighted, ultra-low rates may perversely be driving a greater propensity for consumers to save as retirement income becomes more uncertain.”

It took the economist brain trust at the WSJ about a year to also figure it out:

Policy makers in Europe and Japan have turned to negative rates for the same reason—to stimulate their lackluster economies. Yet the results have left some economists scratching their heads. Instead of opening their wallets, many consumers and businesses are squirreling away more money... Recent economic data show consumers are saving more in Germany and Japan, and in Denmark, Switzerland and Sweden, three non-eurozone countries with negative rates, savings are at their highest since 1995, the year the Organization for Economic Cooperation and Development started collecting data on those countries. Companies in Europe, the Middle East, Africa and Japan also are holding on to more cash.

To the WSJ’s great surprise, central bankers have failed… again:

[T]here is a growing suspicion that part of problem may be negative rates themselves. Some economists and bankers contend that negative rates communicate fear over the growth outlook and the central bank’s ability to manage it.

NIRP “working” precisely in the opposite way of what was intended? Unpossible.

“People only borrow and spend more when they are confident about the future,” says Andrew Sheets, chief cross-asset strategist at Morgan Stanley. “But by going negative, into uncharted territory, the policy actually undermines confidence.” You mean to say that central banks buying $200 billion in global bonds a month is sending a signla that the world has never been in a greater crisis, and that NIRP tops it off by confirming consumer fears that things are only going from bad to worse? But… but… the S&P is at all time highs.

Meanwhile, now that a German banks has finally breached the retail depositor NIRP barrier, expect many more banks to follow. As Bloomberg writes, introducing the sub-zero policy in June 2014 with a cut to the deposit rate to minus 0.1 percent, ECB President Mario Draghi said the move was “for the banks, not for the people.” Should banks decide to transmit the reduction to savers then that’s their decision. “It’s not us,” he said.

It turns out the move was “for the people” after all, if only just 140 for now.

And since it is now common knowledge that NIRP is a total failure, the risk for ECB is that negative rates begin filtering through to the real economy while growth and investment is still sluggish, will “bring the downsides of the policy without the upsides” in Bloomberg’s words. Euro-area growth slowed in the second quarter, data released Friday show, leaving it vulnerable to any fallout from the U.K.’s vote to leave the European Union. In that environment, lenders in Europe regularly complain, and the ECB has acknowledged, that negative rates depress their profitability. Some are already charging corporate clients with large deposits. The Bundesbank estimated last year that the low-rate environment would cut the pretax profit of German banks by 25 percent by 2019.

Even more ironic is that just two weeks ago, some of the “smartest” economists at the ECB predicted that what has just happened would never take place: in a July 28 speech, ECB board member Benoit Coeure said retail customers were staying with their banks because of signs they wouldn’t be charged for their savings any time soon. “Deposits of both households and non-financial corporations have been growing over the past two years, at a similar pace to the period before we entered negative interest-rate territory.” He concluded that “rates on retail deposits seem to have a zero lower bound.”

So what happens next? Michael Kemmer, head of the Association of German Banks, said in a statement on Thursday that he doesn’t expect other banks to follow the example of Gmund am Tegernsee’s Raiffeisen. “It’s up to each bank whether and how to charge for deposits,” he said. “The competition between banks and saving banks in Germany is much too strong.”

Since depositors have no other option, we are confident that Mr. Kemmer will be dead wrong and in just a few weeks we will be reporting on the next, and next, and next European bank to charge its retail depositors negative rates.

The implications: the European savings rate will soar even higher, crushing Keynesian dreams of aggressive spending and sending the European economy into an even more acute defaltionary vortex, bond yields will tumble even lower, and gold will continue its steady move higher as it will have a real – at least in relation to cash – rate of return.