– 18 Years Later – Pam Martens Sends Another Warning To The Fed & The Clintons:

It is the same players that we saw enabling reckless behavior in 1998: Citigroup, the Fed, and the Clinton-led Wall Street Democrats. And, as Jesse notes, here we are again, almost eighteen years later, watching the same short term, selfish characteristics by the big money banks putting the entire economy of productive individuals at risk again…

“There’s something big and scary going on behind the scenes but, as usual, the public isn’t reading about it on the front pages of the newspapers.” Pam Martens and Russ Martens warn that big banks and big insurers send scary signals…

Yesterday, the broad stock market, as measured by the Standard and Poor’s 500 Index, declined a modest 0.29 percent while big Wall Street banks like Citigroup and JPMorgan Chase fell by triple that amount. Bank of America, which bought the big retail brokerage firm, Merrill Lynch, in the midst of the 2008 crash, fell by 8.6 times the rate of the decline in the S&P to give up 2.50 percent. 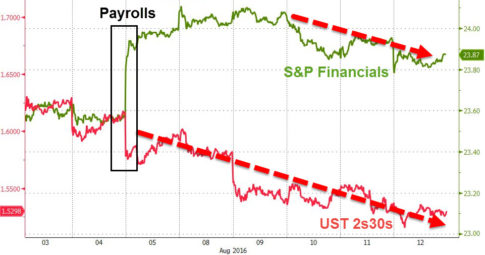 The vote of no confidence on down market days in the complex U.S. banks that hold both insured deposits from Mom and Pop savers while also making huge derivative gambles is a repeat of the action we saw earlier this year. On February 3, 2016, four big Wall Street banks (Bank of America, Citigroup, Goldman Sachs and Morgan Stanley) set 12-month lows in intraday trading – far outpacing the declines in the broader market index as measured by the S&P 500. The banks have recovered some since then but are nowhere near setting record highs as the broader market indices have of late.

These mega banks should be a barometer of the overall health of the stock market and the U.S. economy. After all, these are the banks that are making corporate loans, underwriting corporate stock and bond issues, and doling out credit to consumers. If the mega banks are experiencing air pockets of buying interest in declining markets, this does not bode well for either the market or the U.S. economy.

The price performance of MetLife should also be a red flag that perhaps the Financial Stability Oversight Council got it right when it designated the firm a SIFI.

There is at least one potential concern that is contaminating market perception of the stability of these banks. That’s the fact that despite all of the promises that the Dodd-Frank financial reform legislation would rein in the Wild West derivative trading at these banks, no such thing has happened.

Dodd-Frank was supposed to push the derivatives out of the commercial banks which hold the insured deposits to prevent another taxpayer bailout, the so-called “push out” rule. But in December of 2014, Citigroup was able to sneak legislation into the must-pass spending bill to keep the government running that overturned the push-out rule. The Congressman who placed the provision into the spending bill on behalf of Citigroup was Kevin Yoder of Kansas. The non-partisan Center for Responsive Politics shows  “Securities and Investment” as the number one industry contributing to Yoder’s campaign committee and leadership PAC.

Using its insured bank’s balance sheet as ballast, Citigroup’s bank holding company now ranks as the largest holder of all derivatives in the U.S. According to the Comptroller of the Currency, the very bank that blew itself up in 2008 and received the largest taxpayer bailout in history, now holds $55 trillion in notional amount of derivatives.

But far more alarming is the type of derivatives Citigroup appears hell bent on gaining market share in trading. Last week we reported that Citigroup is plowing into credit default swaps, the very derivatives that blew up the big insurance company, AIG, in 2008 and forced a government bailout of AIG to the tune of $185 billion. We noted on August 4:

“According to the data, Citigroup now has $2.08 trillion in Credit Derivatives (the vast majority of which are Credit Default Swaps). Only JPMorgan is bigger with $3.1 trillion in credit derivatives. Equally frightening, the vast majority of these are private contracts between financial institutions (Over-the-Counter) where regulators lack the granular details of the deals. President Obama falsely promised the American people that derivatives would be moved onto exchanges with proper capital and transparency following the Dodd-Frank financial reform legislation in 2010. That has not happened. The vast majority of all derivatives are still traded in the dark.

The ink was barely dry on our article when the very next day, Bloomberg News reporters Jeff Voegeli and Donal Griffin wrote that Citigroup had “purchased a portfolio of credit-default swaps from retreating rival Credit Suisse Group AG” which had a notional value (face amount) of $380 billion.

To many rational minds, $250 billion here, $380 billion there, pretty soon you’re talking about real money – and real potential for blowups like those seen in 2008.

On March 8 of this year, the Office of Financial Research, which was created under the Dodd-Frank legislation to monitor the buildup of systemic financial risks, released a study on Credit Default Swaps. Its findings were deeply troubling.

The report effectively suggested that the Federal Reserve was conducting its stress tests all wrong. The researchers noted that the Fed’s stress test is looking at only the bank holding company’s “direct counterparty concentrations” for credit default swaps rather than the indirect fallout. The authors found that “indirect effects can be as much as nine times larger than the direct impact” on the bank holding company, and ignoring that reality “could understate the stress on banks.”

That study may have sent a shot across the bow of the Fed, alerting it to nip in the bud any cascading effect from loss of confidence in the European banks that are holding credit default swaps. Both European banks that sold Citigroup their credit default swaps (Deutsche Bank and Credit Suisse) have seen their share price implode over the past 12 months. Deutsche Bank’s stock has lost 56 percent of its value over the past 12 months while Credit Suisse is down by 58 percent based on mid morning trading.

But if the Fed is attempting to ring fence credit default swaps by allowing Citigroup to be the buyer of last resort, that has the potential to spread panic not contain it. Citi is, after all, the bank that brought us this mess by muscling through the repeal of the Glass-Steagall Act.

Below is the testimony of Pam Martens to the Federal Reserve on June 26, 1998, imploring it not to support the repeal of the Glass-Steagall Act and usher in an era where Wall Street banks like Citigroup could own both insured deposits at its commercial bank as well as engage in high risk trading at its investment bank…