Last week at least 10,000 Africans invaded Italy, and since the beginning of the year, nearly 200,000 have landed in Europe via the Mediterranean coastline, the International Organization for Migration (IOM) has announced.

According to an IOM press release, an “estimated” 194,611 invaders entered Europe by sea in 2016, arriving in Italy, Greece, Cyprus, and Spain, through May 25. 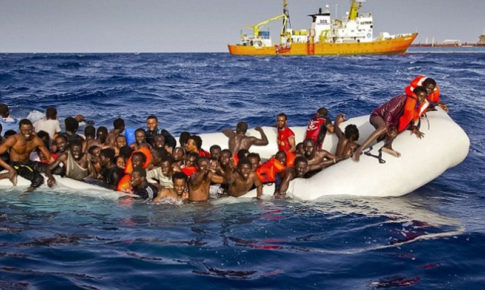 According to the IOM’s Rome representative, Flavio Di Giacomo, at least 37,363 nonwhite invaders arrived on Italian shores through May 25, including all “rescued” by the naval ships deployed by the European Union.

The increase in drowning is attributable to the fact that the number of smugglers has dramatically increased. These smugglers—of assorted Third World origin—have been encouraged to set up business as the realization has dawned that the European Union is not prepared to defend its borders, and simply takes in any nonwhite who arrives and demands “asylum.”

The increase in smugglers has led to the price of a crossing dropping from €2000 last year to only €400 this year—and the smugglers are now putting to sea in any vessel they can lay their hands on—including absurdly unsuited rubber dinghies stashed to the brim with nonwhites.

The number of sailings from the Libyan coast has increased, with the smugglers taking advantage of the total collapse in law and order following the French, British, and American military intervention and destruction of the Gadhafi government.

* In the UK, two extremist leftist activists have been charged with facilitating the entry of illegal immigrants after they helped a group of invaders try and cross the English Channel from France on a rubber dinghy.

Robert Stilwell, 33, from Dartford, and Mark Stribling, 35, from Farningham, appeared at Medway Magistrates Court accused of people smuggling, according to the BBC.

The UK coastguard said it was called just before midnight on Saturday to an incident off the coastal village of Dymchurch. Those on board the boat reportedly alerted their families in Calais after their inflatable boat started taking in water.

A second vessel—which officials say could be linked to the incident—was discovered on the beach at Dymchurch, which means that at least one more group of invaders entered the UK undetected.