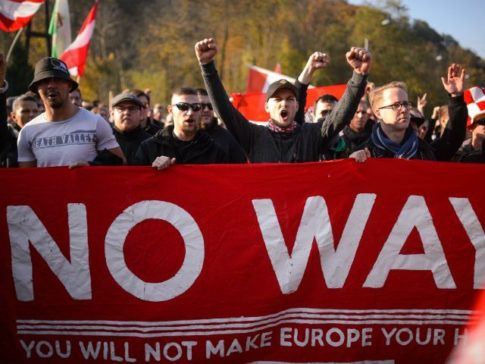 – Poll: Close To Half Of Germans Want Border Closed To Migrants:

A newly released poll shows that close to half of Germans would like to see the borders closed to migrants – and the participants were asked the questions before the recent German terror attacks.

A newly-released Ipsos MORI poll conducted before the recent terror attacks in Germany at Ansbach and Wurzburg, and Nice, France, shows that almost half of the respondents want to end the migrant crisis by sealing the border to incoming asylum seekers.

Forty-four per cent wanted a total border closure, while 45 per cent were against the closing of the border to all asylum seekers, and 11 per cent claimed not to have an opinion either way. Ipsos MORI also asked questions regarding potential terrorists among migrants, reports Focus Online.

While those who wish to keep the border open to asylum seekers managed to lead by a mere one per cent, 71 per cent of the men and women surveyed claimed that the border needs to be better protected and that they believe there are terrorists using the migrant flows to sneak into Germany.

These fears have been confirmed by not only the Ansbach bomber and the Wurzburg axe attacker, who were both asylum seekers, but also by the arrests of Islamic State-linked fighters who have been infiltrating asylum homes  since earlier this year. This week two asylum seekers with links to the radical terror group were arrested in Northern Germany and are accused of plotting terror attacks.

Integration has become a major issue for Germans as some hold cultural differences responsible for the way migrants view and treat women. This clash of cultures has led to mass sexual assaults in Cologne on New Year’s Eve and ongoing sex assaults and rapes in swimming pools across Germany and Europe.

Ipsos MORI also conducted surveys in other countries in Europe on the same issues. Regarding closing the border to asylum seekers, Hungary and Turkey had the largest number of people wanting to secure their borders with 55 per cent of Hungarians and 65 per cent of Turks wanting an end to newly arriving migrants. Sweden, France, and Poland tended toward the other end of the spectrum with majorities desiring to keep the borders open.

The results in Turkey come as no surprise as tensions between Syrian migrants and Turks have been growing for several months. Many fear that these tensions, combined with a breakdown of the European Union (EU) migrant deal with Turkey, could lead to a second massive wave of migrants heading to Europe.