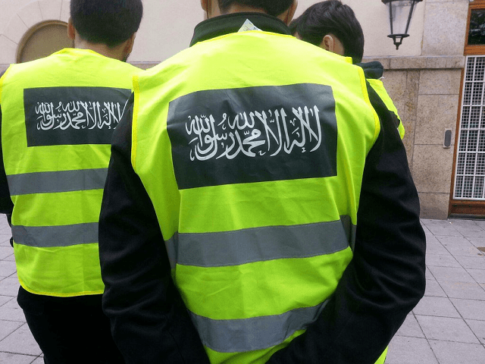 Islamic State and “Sharia Police” stickers have been seen on vehicles in Hamburg, and some fear that extremists may try and harass residents. However, police and security services have denied these reports.

At least one witness has came forward claiming that she has seen Islamic State logos and sharia police slogans on a car in Hamburg. According to the woman, she saw a car at a traffic light populated by three women wearing the Islamic full-face veil, the hood of the car was described as having a large logo on it with a blue border which read: “Sharia Police”.

Now some fear that the so-called sharia patrols that harassed the residents of Wuppertal in 2014 could be returning to German streets, reports Die Welt.

The woman, who preferred to remain anonymous, told the paper that she clearly saw the words “Sharia Police” on the vehicle. The original sharia police were formed in 2014 by radical preacher and Islamic convert Sven Lau. Lau formed the group in order to tackle what he deemed unIslamic or “haram” behaviour in Wuppertal. The group wore high-visibility jackets with the words “Sharia Police” on the back.

The patrols harassed locals in the area who were drinking, gambling, or engaging in any other activity considered socially acceptable in the West which would otherwise be considered haram in Muslim countries. The group also put up stickers – much like their British “Sharia Patrol” counterparts – indicating areas that were “sharia controlled zones” and subject to the Islamic holy law, rather than German secular laws. Alcohol, gambling, music, pornography, prostitution, and drugs were all said to be banned in the area by the group.

Sven Lau himself was revealed to have ties to radical Islamic groups earlier this year after he was arrested on suspicion of aiding and recruiting for Islamic State. German prosecutors alleged that Lau had bought night vision goggles and other equipment in order to aid the group, and had made several trips to the Middle East where authorities say he made contact with Islamic State.

One local Hamburg politician is taking the possible reemergence of the group seriously. Left Party politician Cansu Ozdemir has made a special request via the Hamburg Senate to try and find out what the police and intelligence services know about possible sharia police activity. The Senate responded claiming that they had no evidence of any sharia police activity in the area.

According to Die Welt, there was a second case reported at the Dammtor railway station where witnesses said they saw the Islamic State logo hanging from the rear view mirror of a bus on which five to seven burka-clad individuals could be seen. Police have said there haven’t been any formal reports made to them regarding the incident.