For an increasingly vocal group in this country – that sees ‘the establishment’ for what it is – it may not come as a total shock that CNN is reporting that The (Clinton-appointee-Loretta-Lynch-run) Department of Justice has “pushed back” against The FBI‘s desires to begin a probe to investigate whether there was a criminal conflict of interest with the State Department and the Clinton Foundation during Clinton’s tenure.

Officials from the FBI and Department of Justice met several months ago to discuss opening a public corruption case into the Clinton Foundation, a US official has told CNN…

At the time, three field offices were in agreement an investigation should be launched after the FBI received notification from a bank of suspicious activity from a foreigner who had donated to the Clinton Foundation, according to the official.

FBI officials wanted to investigate whether there was a criminal conflict of interest with the State Department and the Clinton Foundation during Clinton’s tenure.

Makes perfect sense right? But before we go on, as a gentle reminder – it was then President Bill Clinton that gave Loretta Lynch her big break, nominating her in 1999 to serve as US Attorney for the Eastern District of New York... “probably nothing”

So with that said, guess what happened next?

The Department of Justice had looked into allegations surrounding the foundation a year earlier after the release of the controversial book “Clinton Cash,” but found them to be unsubstantiated and there was insufficient evidence to open a case.

As so as a result…

DOJ officials pushed back against opening a case during the meeting earlier this year.

Some also expressed concern the request seemed more political than substantive, especially given the timing of it coinciding with the investigation into the private email server and Clinton’s presidential campaign.

For there to be criminal conflict of interest, there would have to be evidence showing a government employee received something of value in exchange, such as a job post-employment or money. But, as CNN points out,

There doesn’t appear to be anything so far suggesting that in the newly released heavily redacted emails from Judicial Watch, but those emails do raise questions about whether the relationship between the State Department and Clinton Foundation was too cozy, particularly after Clinton pledged she would not be involved with the foundation when she became secretary of state in an effort to prevent an inappropriate relationship.

In a case where there’s a possible conflict of interest that’s not necessarily criminal, the inspector general can look into it and take an administrative remedy if necessary.

And it is this stonewalling in the face of clear evidence of the potential for ‘inappropriate relationships’ that has pushed a normaly docile press corps to its breaking point with The State Department. As Mediaite details, having refused to comment – other than the prepared party-line bullshit – when asked straightforward questions with regard the potential for conflicts of interest raised by the emails, reporters confronted State spokeswoman Elizabeth Trudeau…

Three separate reporters – starting with NBC’s Abigail Williams – asked Trudeau about whether there was any improper relationship between State and the Clinton Foundation.

Trudeau repeatedly downplayed the emails and said the department is “regularly in touch” with a wide range of people. 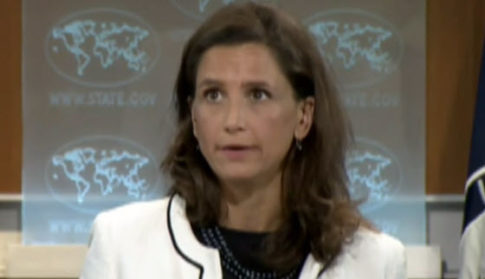 One reporter pointed out that Clinton had “made a pledge” not to involve herself with the foundation while she was Secretary of State. Trudeau shot back that the agreement did not preclude others from talking to foundation staff.

At one point, as another reporter – the AP’s Matt Lee – was getting frustrated with the lack of answers, he said this: “I’m sorry, are you – am I not speaking English? Is this – I mean, is it coming across as foreign – I’m not asking you if – no one is saying it’s not okay or it’s bad for the department to get a broad variety of input from different people. Asking – the question is whether or not you have determined that there was nothing improper here.”

So – to summarize – we have hard evidence of the potential for an inappropriate relationship between Hillary Clinton’s State Department and The Clinton Foundation – after she had pledged that this would not occur. We have The Justice Department  – led by Clinton appointee Loretta Lynch – implicitly blocking The FBI’s probe of The Clinton Foundation’s dealings (for, among other reasons, the timing could be viewed as “politically motivated.” We have a State Department Inspector General who is silent.. and a State Department public relations person who has stonewalled so much, even the American press corps has grown frustrated… and the mainstream media on TV will be running stories on Trump’s poll numbers, his apparent ‘resignation’ to losing, and his “friends and family” economic plan.

Is it any wonder an increasingly frustrated majority of Americans do not trust Hillary, the establishment, and the status quo’s American Dream? Simply put, the lengths by which strings are being pulled to ensure a Clinton presidency may well turn out to the straw that broke the camel’s back of public restraint… especially if GDP, productivity, US corporate revenues, and construction spending is a more accurate picture of economic reality than the goal-seeked narrative-confirming payrolls data.