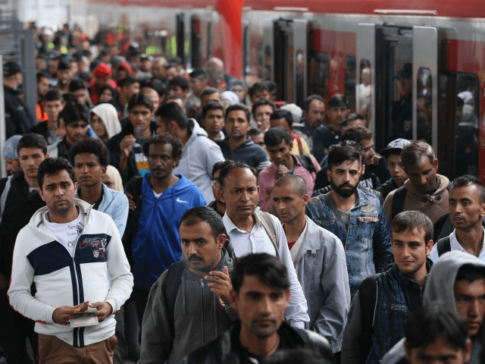 A German family have travelled to Russia to claim asylum, saying their homeland was no longer safe due to the huge migrant influx.

Andre Griesbach and wife Carola drove 1,400 miles to Moscow in camper van, with two daughters and four grandchildren crammed in the back.

The family said they were escaping the “German dictatorship” of Chancellor Angela Merkel, insisting Russian society was far better than their own.

The family arrived in Russia on New Year’s Eve 2015 and have so far been stranded in a motel as they struggle with paperwork.

Russia considers Germany a “safe country” for asylum purposes, but the family have so far avoided deportation due to legal technicalities.

“We have been worried ever since we staged a protest against the German Government outside the Bundestag from September to December 2013,” Andre said.

“We don’t feel like Germany is a safe place for us, or to bring up children. When we left Germany in December 2015 we had no time to organise anything. We only got a tourist visa just so we could enter the country. There was no time to arrange a work visa.”

The Daily Mailreports that the family are claiming the 1918 agreement between Russia and Germany to stop fighting at the end of the First World War was not a true peace agreement, meaning the countries are still technically at war. In this scenario, Russia is obliged to protect them as refugees, the family argues.

“We want to stay here and work. We are not interested in living off the state,” Andre added.

“I’ve had plenty of people offer me work, as a farmer, or a construction worker. I built my own house in Germany. I could also work as a translator or a German language teacher.

“In Germany you need so many qualifications to get some jobs, but in Russia you can just do it. I’ll be happy to work once the Russian government lets me.

As well as mass immigration, the Griesbachs claim Germany lacks democracy and is “morally corrupt”.

“People believe Germany is a democracy but it’s not,” Andre said. “It’s morally corrupt and people don’t about anything like punctuality or crime anymore. There is no society. Russian society is much better, and Putin is a much better example of a leader. The German state is corrupt, so he is much more democratic than Merkel.

“They are inviting all the immigrants over so they can stir up trouble in the country and start the war the government wants. No country but Germany wants so many foreigners in their country.

“It’s a lot better in Russia,” he added. “They care about the family and put it first.”

Carola added: “Everyone knows the situation in the German media, and on the relationship between migrants and violence is. The media reports on a small part.

“It’s not safe for children or women in Germany anymore. The Police rarely look into cases, because they are prevented from doing so by the system or they are attacked by the so-called asylum seekers.

“But let me make it clear – we don’t have anything against asylum seekers. We have a duty to help people worse off than ourselves.”

Germany has been overwhelmed by the number of migrants entering the country, receiving well over a million last year. Breitbart London reported last year how authorities had to deploy the army to man the order to help the struggling police forces. Even this could not keep the influx under control.