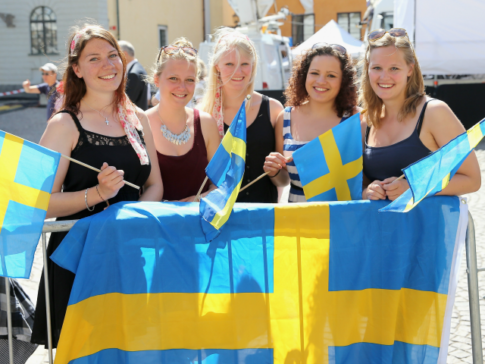 Although more well-known for ABBA, Ikea and Avicii, today Sweden’s international image is being tarnished by a much darker reputation: as the rape capital of the Western world. The irresponsible policies of Sweden’s leaders have caused years of suffering for Swedish women.

By opening the gates to massive immigration from Africa and the Middle East, Swedish politicians have brought cultures and values in strict opposition to ours. Immigrants raised in societies without respect for women, who see women as possessions whose main purpose in life is to please their husband, have no place in our liberal society. Many male immigrants, when faced with our liberal lifestyle and beautiful women, are unable to control themselves.

Our socialistic justice system then rewards them for their lack of control by caring more about the well-being and integrity of criminals than it does about the victims. It should be obvious to anyone how these factors have marked the way for Sweden to become the rape capital of the world, but unfortunately not. For those who need more persuasion, I will draw some examples that have all occurred over the last month in Sweden.

Recently, an immigrant from Eritrea who brutally raped and beat a young Swedish girl so badly that she got fractures in her spine received his “punishment.” He will not even be deported.

Last month, at a football tournament in Gothenburg, a team from Morocco were kicked out for playing a game of “Taharrush” with some young Swedish girls (or, in other words, collective sexual assault by a group of men in a public place). A wannabe famous football player then wrote an article blaming “the old male attitude”. Unable to see any cultural reasons behind the crimes that had happened.

At a festival in Skellefteå in July, sexual assaults were committed at an event where sponsored buses had been provided for asylum seekers. The Swedish establishment couldn’t fathom how the now infamous “Don’t touch” bracelets they had handed out hadn’t protected the girls.

Last week, there were several reports of gang rapes but also “regular” rapes. One of which happened at one o’clock in the afternoon, in broad daylight, to a 14-year-old girl. As always, it is obviously a coincidence that some of them occurred close to homes for asylum seekers.

Thankfully, someone has figured out why all these rapes are taking place in Sweden. Börje Svensson, a psychotherapist and “an expert on sexual criminals”, was interviewed in one of the biggest Swedish newspapers recently about Sweden’s rape epidemic. His conclusion? The good, hot, summer weather.

Providing the perfect reason that absolves the Swedish establishment of all responsibility, Svensson described how we have been a bit unlucky with the weather this year. Hopefully we will have a colder summer next year and sexual crimes will then be an old memory linked to that one hot Swedish summer. If by any chance, there are still rapes during a colder summer, our experts will simply find another scapegoat rather than looking straight at the imported criminals. Perhaps fewer flies, or high ocean levels. Say hello to the mental hospital named Sweden everyone.