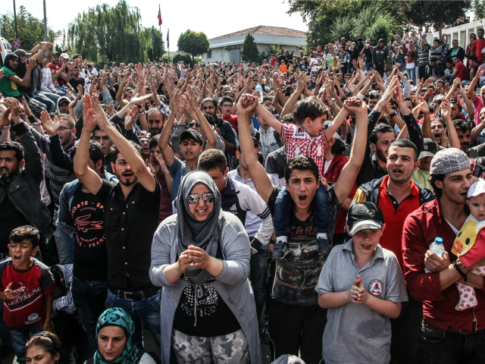 – Turkey Warns of Three Million More Migrants, If Accord With Europe Falls:

Turkish President Erdogan’s recent threat to reopen migrant routes from Turkey into Europe would mean a possible influx of as many as 3 million more migrants, according to reports Tuesday.

In Turkey, there are some 2.8 million Syrian refugees alone, without counting the many thousands of Afghans and Iraqis who are anxious to get into Europe. If President Erdogan carries out his threat to renege on Turkey’s agreement with the European Union (EU), as many as 3 million migrants will be looking to find new openings into Europe through the so-called Balkan route.

“The European Union is not acting sincerely with Turkey,” Erdogan said in a recent interview with the French daily Le Monde. “We have taken in 3 million refugees, whereas the EU’s only concern is keeping them out of its territory.”

The Turkish President has been using the prospect of new waves of millions of migrants to pressure Brussels into accepting his demand that Turkish citizens be allowed to enter Europe freely without visas, which he sees as a first step toward eventual Turkish membership in the EU.

Erdogan has insisted that the waiving of Europe’s visa requirement was meant to go into effect simultaneously with the agreement regarding Turkeys’ readmission of migrants from EU states, especially Greece. “If our demands are not met, readmissions will no longer be possible,” Erdogan warned.

The President’s threats echoed those of Turkish Foreign Minister Mevlut Cavusoglu who issued a stern ultimatum to European authorities in a recent interview with the German Frankfurter Allgemeine Zeitung. Either Brussels lifts its visa requirements for Turkish citizens or Turkey will withdraw from last March’s agreement on migrants.

If the EU grants visa liberalization, however, hundreds of thousands of migrants are likely to enter Europe “legally” from Turkey, and EU authorities will have little way of ascertaining the origins or intentions of those coming in. The risk of infiltration from Islamic terrorists is high, since the Turkish government has expressed its intention to issue some 350 thousand new passports, according to dubious criteria.

Angelino Alfano, Italy’s Minister of the Interior, has reacted strongly to Turkey’s threat, suggesting that the fallout for Europe could be catastrophic.

“It is clear that if Turkey were to open the floodgates it would be devastating for the whole of Europe,” Alfano said, while urging EU members to remain on high alert. “Turkey has a refugee population in the millions on its territory,” he noted.

“From 2015 to the present we have searched 344 ships to monitor the flow along a route of potential interest for foreign fighters. The Turkish developments are worrisome because migration becomes a formidable weapon of pressure even in diplomatic relations,” he said.

The Italian Minister also criticized the “No Borders” protest movement, noting that recent skirmishes in the north of Italy demonstrate that there are organizations that have nothing to do with migrants whose interest lies in instrumentalizing the emergency for political or even subversive motives.

“There will be no indulgence toward those who try to exploit immigration,” Alfano said.

“The opposition can protest as it likes,” Alfano added. “but the truth is different. Up to now we haven’t had the problems that the French and English have had in Calais. The system has worked here.”