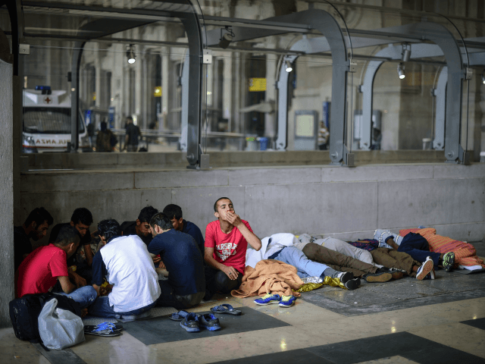 – Milan Overrun by ‘Invasion’ Of Thousands Of Immigrants:

As other migratory routes north have closed, migrants have converged on the Italian city of Milan, in what Italian press are describing as an “invasion” of thousands of migrants and fear of thousands more.

In past weeks, caravans of migrants who arrive in southern Italy have made their way north, only to find their progress halted by tight borders with France, Austria and Switzerland. The result has been a growing migrant population forming in such areas as Lake Como, Ventimiglia and now the Italian industrial capital of Milan.

The migrant bottleneck caused by renewed border controls has been exacerbated by a growing number of migrants who have abandoned hope of making it to Germany or Sweden and now look to Italy as their final destination.

Similarly, in 2015 the average stay in city refugee shelters was only 6 days, whereas today it is three times that high.

Refugee tent camps have arisen spontaneously at key border points, such as Ventimiglia on the French border, Chiasso on the Swiss border, the Brenner Pass connecting Italy with Austria. But now, thousands of migrants on converging on Milan as well to the great consternation of local citizens. According to local reports, a record number of some 3,300 migrants are now living in the city.

According to some reports, Milan now finds itself on the verge of “collapse.”

In order to avoid unseemly camps, the Milanese have hastily instituted two temporary structures in the local towns of Bruzzano and Quarto Oggiaro after some 400 migrants were found camped at the Milan Central train station.

“They are not refugees,” declared Lombardy’s president Roberto Maroni. “They are illegal immigrants who must be sent home.”

Meanwhile, according to Riccardo De Corato, regional advisor for the Fratelli d’Italia party, with the latest influx of immigrants, “Milan is already a tent city.”

De Corato has been a vocal opponent of Milan’s Mayor, Beppe Sala, who has proposed building more structures to accommodate further waves of immigrants.