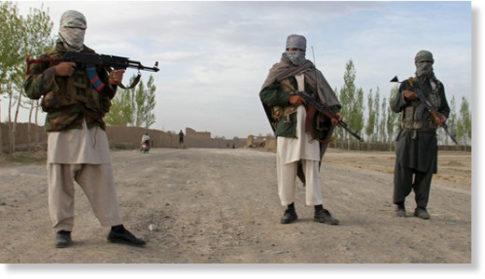 – The only solution to fixing Afghanistan is for the US to get out:

The Taliban and ISIS don’t have solutions for Afghanistan, neither does the US. It only exacerbates religious, sectarian and tribal differences, says Sara Flounders of the International Action Center. The US arms one group against another to keep war going, she adds.

Islamic State (IS, formerly ISIS/ISIL) reportedly forged an alliance with the Afghan Taliban, which the US says it remains committed to appeasing.

IS also has a foothold in neighboring Pakistan and claimed responsibility for Monday’s suicide bombing there, which killed at least 70 people and wounded over 100. The Pakistani Taliban was the first group to take responsibility, but IS claimed the attack, shortly after.

RT: Both groups are claiming responsibility. What do you read into that?

Sara Flounders: It’s been 15 years of US war in Afghanistan – the longest war in US history and not a day, not a minute of peace or stability. There are hundreds of thousands of US troops who have cycled through Afghanistan and also tens and tens of thousands of NATO, EU forces, even more of contractors and mercenaries. It has been hellish for the people of Afghanistan to have had absolutely no improvement – they are poorer today than 15 years ago when the war started. And for all the US promises that they would modernize and that they would build roads and hospitals and schools; that they would bring democracy and improve the status of women – they have brought nothing but war creating enormous numbers of refugees, of disabled people, of homes that are in ruins.

Afghanistan today is the poorest country in the world – lowest life expectancy. It really is in every way shameful. So for this talk about the Taliban should go into a peace process with the legitimate government – Afghanistan is a country that is occupied. There is not a shred of legitimacy in the government and from the people there is boundless hate. It is a real problem. The only solution for Afghanistan is for US forces to get out. They can bring nothing helpful, progressive, peaceful, or secure to Afghanistan – that is a fact and everybody knows that.

Daoud Sultanzoy, former Afghan MP, Independent Member of Parliament: This might be a tactical decision by both sides to get together so they can save their resources and put their resources together. But historically speaking, in the east, when the ISIS/ISIL/DAESH forces came under government attack they lost a lot of their resources and they felt they were under pressure, and that is why they joined forces with the Taliban…

RT: Some conflicting reports coming out of Afghanistan on a possible link-up between the Taliban and Islamic State. How much weight do you attach to the idea of a split in the Taliban over ISIS?

SF: Well, here is the problem: there are lots of people in Afghanistan, who would make a pact with a devil himself. There is such a hatred of the US occupation. Everyone there knows that from the sky, when the US is dropping bombs and firing predator drones – they don’t know if they are hitting ISIS, or Al-Qaeda, or Taliban, or a peasant tilling his field. They have no idea. Yet, this war goes on, and on, and on. I think a lot of forces would say: “Why should we kill each other, when we are being killed from the sky?”

Neither the Taliban, nor ISIS has any solutions for Afghanistan. But who destroyed the hope of Afghanistan? Who absolutely gathered the Mujahedeen forces? It was the US and Saudi Arabia at the time of the 1979 Revolution, and kept them there, the most reactionary warlord corrupt and futile groupings. And then right back in 2001 the same corrupt alliance. So this is a real problem, but we do know that no matter what is happening on the ground, the people can sort it out. If the US would get out of the air, would remove their bases, the people there have long experience in dealing with each other. But this outside force in every way exacerbates sectarian, religious, national tribal differences. And do that consciously: they arm one group against the other in order to keep war going, because they want US bases right there next to Iraq, Russia, and Pakistan. It is about geopolitical positioning. It is about the US control in Central Asia – that is what this war is about…

Daoud Sultanzoy, former Afghan MP, Independent Member of Parliament: In the north of Afghanistan, the Taliban and ISIS have been working together for a long time…Most of the non-Afghan ISIS forces have been working with Taliban very closely in the north… But in the east this might be a very tactical decision, on the one hand, and also the necessity to reinforce their efforts together…

Abayomi Azikiwe, Editor, Pan-African News Wire, called the latest news on the Taliban and ISIS claiming responsibility for the Pakistan attack and a reported truce between them an “intriguing development.”

“We know that in other regions such as Nigeria, as well as Somalia, there have been claims that ISIS has formed alliances with the Islamic extremist organizations in those countries – in particular Boko Haram in north eastern Nigeria, as well as the Al Shabaab organization in Somalia,” he said. “Whether this is something that is localized in regard to the situation in Pakistan, or whether it is an international development, where perhaps disgruntled elements within the IS, which have been under fire in Turkey, as well as Syria, Iraq, and Libya, may be looking for new allies,” he added.

The same refers to the escalation of the US and NATO forces in Central Asia, Azikiwe told RT.

“As was decided at the recent NATO summit in Warsaw, Poland – the Obama administration and others saying that they are going to escalate the pressure in Afghanistan, and of course this will spill over into Pakistan as well,” he added.

Asked whether he thinks it is plausible that the Taliban could be internally squabbling over the prospect of teaming up with ISIS, Azikiwe said: “Yes, we’ve seen the development of these alliances over the last decade and a half, when the US and NATO intervened in Afghanistan in 2001.”

“They claim that their principle target was Al-Qaeda. But later on there was the targeting of the Taliban, which was overthrown in October 2001 in the aftermath of the bombings in New York at the World Trade Center and the Pentagon in Washington DC,” he said. “Then there have been other organizations that have been targeted as well – the Haqqani network and others, the Taliban in Pakistan has also been the focus of drone attacks; and US interventions across the border from Afghanistan as well. So these alliances have been shifting over the course of the last few years.”