– France Moves To De-Radicalize Its Mosques:

Submitted by Johanna Markind via The Gatestone Institute,

France is taking steps to de-radicalize its mosques in the hopes of preventing the radicalization of its Muslim community.

Since December, the French government, acting under expanded emergency powers, has shut down twenty mosques for preaching Salafism, a strict and highly politicized Sunni interpretation of Islam. Groups such as ISIS adhere to Salafism. About 120 of France’s 2,500 mosques and prayer halls are considered Salafist.

A little background: the United States’ 9/11 Commission found that Saudi Arabia uses charity and “government funds to spread Wahhabi [a Saudi form of Salafism] beliefs throughout the world, including in mosques and schools.” The technique of spreading Wahhabi-Salafi beliefs by funding mosques and, crucially, those who preach in them, has occurred in places as far-flung as Pakistan, Senegal, and Germany.

In Belgium, the Saudis remade an Oriental pavilion into the Great Mosque of Brussels. They continue to fund many Belgian clerics whose “radical Salafist teachings came from a very different tradition” from the Islam of the Muslim communities who immigrated to Belgium from Morocco and Turkey. Gulf charity funds likewise radicalized the previously tolerant Muslim community in Kosovo. Both countries are among the largest sources of ISIS fighters in Europe. Belgium has provided more fighters per capita than any other country in Western Europe; Kosovo is the overall second-largest European country of origin, again, per capita.

The problem is not that foreign charities directly subsidize jihadi activities, but that they promote a highly aggressive ideology with a political agenda, whose followers are more likely to take the next step into violent action. In trying to contain radical Islam, Kosovar authorities have arrested 14 imams and shut down 19 Muslim organizations for acting against the constitution, inciting hatred and recruiting for terrorism. Belgium has arrested militant preacher Fouad Belkacem and threatened to close radical mosques in the Molenbeek district of Brussels.

The Saudis have also funded mosques in France, including one in Nice that opened in July (two weeks before the Bastille Day attack) after a 14-year struggle. The city’s former mayor, Christian Estrosi, had accused building owner Sheikh Saleh bin Abdulaziz, who is Saudi Arabia’s Islamic Affairs Minister, of “advocating sharia.” 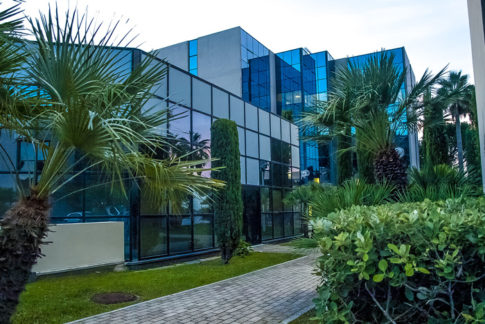 A Saudi-funded mosque opened in Nice in July (two weeks before the Bastille Day attack) after a 14-year struggle.(Image source: Institut Niçois En-nour)

France has had a long-running debate about foreign influence over its Islamic institutions. A Senate report published on July 5, 2016, recommended monitoring foreign funds by having them channeled through a dedicated foundation. It also called for setting up a training program sufficient to train the country’s Muslim religious leaders that is “adapted to the French context.” Currently, France has two small institutions qualified to train imams, which are inadequate to meet the community’s needs. Therefore, about 300 imams were hired from abroad. The foreign imams are not well-adapted to France, and many of them speak French poorly, if at all. Finally, the report cautioned that there is an inherent tension between the government’s desire for more control over French Islam and the country’s legal separation of “church” and state.

Apparently in response to the report’s recommendations, on July 29, Prime Minister Manuel Valls announced he favors imposing a temporary ban on foreign funding of mosques. Valls also urged that imams be locally– rather than foreign-trained.

On August 1, the French Muslim Council announced the creation of a new foundation to help finance French mosques and keep out radical benefactors. Council head Anouar Kbibech made the announcement after meeting with Interior Minister Bernard Cazeneuve. Cazeneuve, who announced the planned closure of 20 mosques after the same meeting, said he wants the foundation to launch in October, and added that the government is working to assure “total transparency” in mosque financing.

The announcement was welcomed by France’s political opposition, although politicians have expressed concern that the de-radicalization efforts will undermine France’s strict policy of separating church and state, called laïcité. Democratic Movement party president, François Bayrou, and Socialist party member, Julien Dray, appeared to endorse the proposal, stating, “Funding is an urgent issue for French society. The financing of mosques is a problem since it is financed by foreign powers.”

Roger Karoutchi, spokesman of the French Republican party, also expressed support, but cautioned “there should be no renunciation of the 1905 Act [separating church and state].”

Cazeneuve likewise stated that the government seeks a way forward that will “strictly respect the secular principles of the Republic.”

The main practical problem to implementing the new foundation appears to be funding. State money may not be used to fund religious institutions directly. Bayrou, Dray, and others have advocated raising money by taxing halal food, but that idea is controversial. Among other things, it may embroil France’s Muslim community in a dispute to create a commonly recognized standard about what constitutes halal food.

Thus, France has opened a new front in its battle against Islamist terrorism. Fighting terrorism is not just the responsibility of the government, the prime minister said, but rather all of society needs to get involved. Salafism “has no place in France,” Valls stated, adding that France needs to “invent a new relationship with Islam.” In essence, the French government is trying to promote the development of a “kinder, gentler” form of Islam in France by limiting the influence of foreign Salafists.

Imagine what would be said if Donald Trump suggested this in America?