– Canada Has Followed America Into The Integrity Void:

The Canadian government is as corrupt as the American one. Canadian Supreme Court Justice rules that Canada manufactured a “terror plot” in order to create an event with which to scare Canadians into accepting a police state.

In a damning judgment, British Columbia Supreme Court Justice Catherine Bruce ruled Friday that the Royal Canadian Mounted Police (RCMP) broke the law and “manufactured” a terrorism plot as part of a months-long entrapment operation that ended in a Vancouver-area couple being arrested and ultimately sentenced to life in prison.

John Nuttall and Amanda Korody were arrested July 1, 2013 and accused of planting bombs on the grounds of the British Columbia legislature in Victoria.

But Justice Bruce found that the couple would never have taken any action had it not been for the active encouragement and coercion of undercover RCMP officers. “This was not a situation in which the police were attempting to disrupt an ongoing criminal enterprise,” declared Bruce in her 210-page judgment. “Rather, the offences committed by the defendants were brought about by the police and would not have occurred without their involvement. By any measure, this was a clear case of police-manufactured crime.”

Undercover officers posing as Islamist extremists, befriended the isolated couple, who were recent converts to Islam, and encouraged them to act on statements they had made decrying the killing of Muslims in US-led wars and threatening to wage jihad and die as martyrs for Islam. Subsequently, the police suggested and facilitated the legislature bomb plot, removing obstacles that the police themselves acknowledged Nuttall and Korody would not have been able to overcome alone, and going so far as threaten them when they appeared reluctant to proceed.

Justice Bruce found that “Operation Souvenir,” which involved over 240 RCMP officers and cost $900,000 in overtime hours alone, breached the Criminal Code and tarnished the administration of justice.

Calling police claims Nuttall and Korody constituted a grave threat to public safety “quite farcical,” Justice Bruce wrote, “I find that the RCMP knowingly facilitated a terrorist activity by providing money and other services to the defendants that helped and made easier the terrorist activities.”

The spectre of the defendants serving life sentences for a crime that the police manufactured, exploiting their vulnerabilities, by instilling fear that they would be killed if they backed out … is offensive to our concept of fundamental justice.

The Crown has announced it will appeal Justice Bruce’s ruling.

Despite Bruce issuing a stay on proceedings, with the life imprisonment sentences for both being quashed, Nuttall and Korody were brutally rearrested within a few hours. They appeared before a provincial court judge Friday afternoon and were compelled to sign peace bonds, a draconian power at the disposal of the state to restrict the activities of so-called terrorist suspects even if they have not been convicted of a crime. Nuttall and Korody will be restricted from certain areas, including the legislature grounds, synagogues and Jewish cultural centers, are not allowed to visit certain internet sites, and must regularly report to a bail officer.

In comments to the press, Crown lawyer Peter Eccles claimed Justice Bruce’s decision would undermine the police’s ability to pursue terrorism suspects and sought to link Nuttal and Korody to the recent horrific attacks carried out by lone perpetrators in Germany and France, even though the court had just ruled that there was no evidence to support the suggestion that the couple intended to carry out an attack. He declared, “As we’ve seen even in the last six weeks, lone participants are undeniably the greatest challenge law enforcement faces.” Such scare-mongering neglects to mention the fact that the individuals who have carried out such attacks have frequently been disorientated, alienated and sometimes radicalized by the aggressive policies of war abroad and repression of refugees and attacks on democratic rights at home.

The state’s power to use peace bonds was expanded dramatically under Bill C-51. This sweeping police-state law was rushed through parliament by the previous Conservative government with the backing of the then-opposition Liberals in the wake of attacks on armed forces personnel in Ottawa and St. Jean-sur-Richelieu in October 2014 that killed two people. In fulfillment of an election pledge, the Liberal government of Justin Trudeau has pledged to make cosmetic changes to the legislation, including implementing a parliamentary oversight committee, but intends to leave the peace-bond system untouched.

Nuttall and Korody’s conviction as “terrorists” was itself an important element in the right-wing, anti-democratic campaign whipped up by the political elite and media last year to justify ramming Bill C-51 through parliament without any serious public debate.

More broadly, the constant invocation of the threat of “terrorism” has been exploited to accustom the population to a drastic assault on their basic democratic rights, as well as to legitimize Canada’s expanded involvement in military operations in the Middle East in alliance with the United States.

The Liberal government upholds the key provisions of Bill C-51, including the right of the Canadian Security and Intelligence Service (CSIS) to actively disrupt vaguely defined “threats” to public security, the right of the police to detain terrorist suspects for up to seven days without charge, a new criminal offence of promoting terrorism in general, and a catch-all ban on “terrorist propaganda” that could be used to clamp down on social and political opposition to the government.

The fate that befell Nuttall and Korody makes clear the dangers faced by working people from authorities wielding such unchecked powers.

The couple, who lived in a basement apartment in a Vancouver suburb, were extremely socially isolated and recovering drug addicts. They rarely left their home, and were described by the judge as “naive,” “childlike” and “gullible.” Even police briefing notes presented at the original trial acknowledged Nuttall was possibly “developmentally delayed.”

Marilyn Sandford, Nuttall’s attorney, pointed out that her client suggested a number of outlandish ideas for attacks, including hijacking a nuclear submarine and firing rockets across the border at Seattle.

When the couple showed signs of refusing to go through with the legislature attack, they confronted threats from the undercover officers, including warnings they would be killed. They were also induced with offers of jobs and help in an elaborate escape plan.

Finally, when a new primary investigator was appointed to the case a week before the alleged plot was to take place, he had the couple removed from their home to get rid of distractions. Vaz Kassam explained to the court that other officers were frustrated because the pair were not preparing for the attack as planned.

“The police decided they had to aggressively engineer the plan for Nuttall and Korody and make them think it was their own,” Bruce noted.

Maureen Smith, Nuttall’s mother, said the pair would require counseling to recover from the ordeal they had experienced over the past three years.

The media immediately sought to portray the vast undercover sting, which theNational Post admitted was ordered at “senior levels,” as simply an error or bungled operation. The Post commented in its article, “It took one clear-headed judge to see through the stupidity and explain to the public the true facts of this policing and prosecutorial affront.”

In reality, the methods employed against Nuttall and Korody are standard practice for the security and intelligence apparatus in Canada, which functions in close collaboration with its partner organizations in the United States.

In a Human Rights Watch (HRW) report published in 2014, the organization noted a worrying trend in Canada of “discriminatory investigations, often targeting particularly vulnerable individuals (including people with intellectual and mental disabilities and the indigent), in which the government—often acting through informants— is actively involved in developing the plot, persuading and sometimes pressuring the target to participate, and providing the resources to carry it out.”

HRW also issued a specific warning related to the prosecution of Nuttall and Korody. Andrea Prasow, HRW’s deputy director in Washington, compared the proceedings in BC to the US government’s determined efforts to entrap vulnerable individuals in concocted “terrorism” plots in the aftermath of 9/11. “What we’ve seen allegations of [in BC] are at least similar practices to what we’ve seen in the US,” she commented last June following the original convictions.

In the so-called VIA Rail terror plot, an undercover FBI agent and other security officials used an elaborate entrapment scheme to implicate Chiheb Esseghaier and Raed Jaser in a plan to derail a passenger train traveling between Toronto and New York. The agent repeatedly refused to answer questions in court, citing the secrecy of his work, and the media was banned from the courtroom and prohibited from reporting his two weeks of testimony.

Even though two psychiatrists ruled that Esseghaier was mentally unfit for the sentencing process, declaring him potentially schizophrenic, the judge ignored pleas from his lawyers to consider delaying sentencing and placing him in a hospital for treatment. Esseghaier and Jaser were sentenced to life in prison last September. 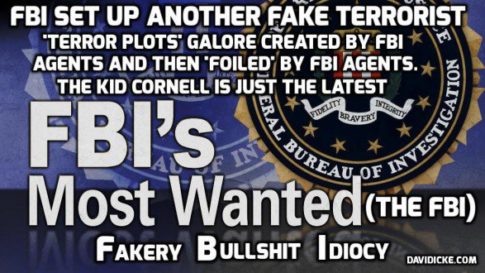