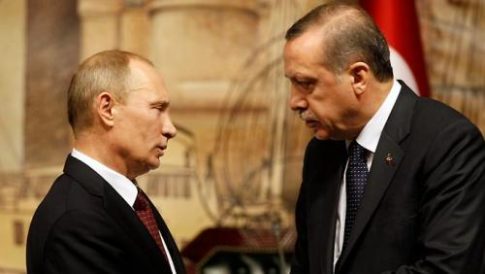 – West On Edge As Erdogan Meets With Putin: “Turkey’s Relations With The US Are The Worst In 50 Years”:

The bad blood between Turkey and Russia over the November downing of a Russian fighter jet over Turkey is all but forgotten as Turkish president Recep Tayip Ergodan is to meet with “his friend” Vladimir Putin in the latter’s home town of St. Petersburg in hopes of turning a fresh page in the two countries’ relations. It will be their first meeting since diplomatic relations between the two nations turned icy cold late last year. In a slap to the face of its Western friends, as the FT puts it, instead of visiting a Nato ally, Erdogan’s first trip abroad since surviving last month’s coup attempt the Turkish president is going to Vladimir Putin’s Russia.

In a dramatic pivot by Turkey, the summit has taken on broader geopolitical significance. “The west is criticising Erdogan over his crackdown in the wake of the coup, and Erdogan is denouncing them over that,” said Alexei Malashenko, an analyst at the Moscow Carnegie Centre. “This tension between Turkey and its Nato allies is extremely beneficial to Russia.” The rapprochement between Moscow and Ankara began in June, before the coup attempt, when the Kremlin accepted Mr Erdogan’s apology for the downing of the aircraft over Turkey’s shared border with Syria. Within days, officials from both countries had begun talks to roll back sanctions Russia imposed on Turkey following the incident the FT adds.

Since then broader issues have pushed Moscow and Ankara closer together, “including the desire to teach the west a lesson and shared interests in dealing with the regional security threat.” Ankara also welcomed the fact that Moscow gave its unequivocal backing to Turkey following the failed coup.

“We appreciate the fact that the Russian Federation assumed a clear position on this issue,” Ibrahim Kalin, Mr Erdogan’s spokesman, told Russian news agency Tass last week. This tone contrasts with Ankara’s rhetoric towards its allies. Mr Erdogan has repeatedly lashed out at the US for its response to the coup attempt and its failure to extradite Fethullah Gulen, the 75-year-old former imam accused of masterminding the plot from his self-imposed exile in Pennsylvania — a charge he strongly refutes.

Meanwhile, there has been an inexplicable deterioration in Turkey’s foreign relations with the west. Just hours after a visit to Turkey last week by Joseph Dunford, head of the US military, aimed at soothing tensions, Erdogan unleashed some of his harshest remarks so far. “I’m calling on the US: what kind of strategic partner are we, that you can still host someone whose extradition I have asked for?” he said. He went on to accuse the west of supporting terrorism and said the “script” for the plot “was written outside” Turkey.

One Turkish diplomat in Moscow said: “Our relations with the US are the worst in 50 years  . . .  and that definitely makes engaging Russia an attractive option.”

Needless to say, For Putin, the tension between the Nato allies is welcome — Moscow has for two decades condemned Nato expansion and recently stepped up its criticism that the alliance was a threat to Russia. Mr Malashenko talks of a “revival of the theory that Russia and Turkey should be close because both are former empires . . .  simultaneously European and somehow unique.”

Meanwhile, Ankara appears to expect much from the much anticipated meeting, suggesting that the Kremlin has all the leverage ahead of today’s summit.

“This will be a historic visit, a fresh start. I believe that a new page will be opened [during]… the negotiations with my friend Vladimir [Putin],” President Erdogan told TASS news agency in an exclusive interview ahead of the visit, adding that “there is yet much for our countries to do together.”

Erdogan’s statement was echoed by Turkish ambassador to Russia Umit Yardim, who told RIA Novosti: “I can definitely say that it will be a historic meeting. We were preparing it for nearly one month.” He said the two leaders are expected to meet tête-à-tête and then come out with a “roadmap” to help bring Russia-Turkey relations “to a brand new level.”

While Ankara is obviously eager to improve ties with Moscow, which have seen a dramatic downturn as of late, Russia has maintained a more reserved and pragmatic approach. “The Syrian crisis will be discussed in depth and we hope that Turkey’s position will become more constructive,” Yury Ushakov, Vladimir Putin’s foreign policy aide, told reporters on Friday.

Moscow and Ankara still largely disagree on Syria, as Turkey wants President Bashar Assad to be ousted, while Russia supports him and the Syrian army in their fight against Islamists. Russia’s Defense Ministry has accused Turkey of aiding Islamic State (IS, previously ISIS/ISIL) in the past, citing data indicating that the militants are being re-supplied and re-armed from Turkey. Kremlin spokesman Dmitry Peskov said on Tuesday: “We have a serious conversation ahead on how, at what pace, and in what sequence we will work on restoring our relations.”

The talks will likely center on “current economy-related issues” and the Syrian crisis. “You may feel free to forecast that an in-depth conversation on regional affairs, including Syria, will also take place,” he stressed.

Relations between the two countries began to thaw in late June after Erdogan sent a letter to the Kremlin that was viewed in Moscow as offering an apology for downing Russia’s jet. The letter, quoted by the Kremlin, said Turkey was “ready for any initiatives to relieve the pain and severity of the damage done.” Moscow said it acknowledges that Turkey is serious about restoring closer relations between the two countries. “The Turkish President is coming to St. Petersburg, despite a relatively complicated situation at home,” Ushakov asserted.

And while Turkey pivots to Russia, the bigger question is what happens to Turkish relations with the west next. Western diplomats, cited by the FT, worry that Ankara could use Russia as a lever in its relations with the west, including over Syria. Turkey cut off power to the Incirlik air base, from which the US launches bombing raids against Isis, for a week after the coup.

Russian and Turkish diplomats said they expected Turkey would now tone down public criticism of Bashar al-Assad, Syria’s president, and privately acquiesce to Moscow’s position that his regime is one of the guarantors of preserving Syrian statehood at least during a transition period. Ankara has backed rebels battling forces loyal to Mr Assad, while Russia supports the Syrian leader’s regime. In return, Turkey will hope that Mr Putin will agree to moderate his support for Syria’s Kurds, although one Russian foreign policy expert said any policy revision would be “tricky” in practice. “Ties with the Kurds run deep throughout Russia’s diplomatic community, and we will never give up this asset,” he said.

Despite shared interest over regional issues, officials in Moscow and Ankara also remain guarded in guessing the outcome of their leaders’ meeting. “One should not expect things to very quickly return to the level where they were before the [fighter jet] incident,” said Dimitry Peskov, Mr Putin’s spokesman who spent eight years as a diplomat in Ankara. “It will take time to restore trust.”

Mr Malashenko said the test of whether the reconciliation was strategic or a tactical ruse would be evident in the pace at which Turkish-Russian economic ties were restored. One European diplomat said: “Erdogan can lash out all he likes but he needs us. He knows he cannot trust Putin. How many Turkish-Russian wars have there been over the last three hundred years? How many did the Turks win?”

Perhaps said diplomats are a tad too optimistic on the legacy ties that bind. Earlier today, Turkey struck a major blow to Europe’s critical migrant deal that is keeping millions of Syrian refugees out of Europe, when it announced that the EU’s demand that Turkey must overhaul its terror laws in return for visa-free travel is “impossible” in the aftermath of last month’s attempted coup, the country’s EU minister has warned.

In an interview with the Financial Times, Omer Celik, dealt a fresh blow to the fragile deal between the EU and Ankara that has helped stem the flow of refugees and migrants to European shores. For the EU to ease visa requirements for 79m Turkish citizens — one of a series of incentives promised in return for Turkey’s help with the refugee crisis — Turkey needs to amend its sweeping terror legislation in line with EU law and guidance from the Council of Europe.

Celik said that Turkey was open to discussions about counterterror law with European partners and could commit to reforms in the longer term. He warned, however, that it was “impossible” in the short term after the government was almost overthrown by alleged supporters of Fethullah Gulen, an exiled cleric who Turkey has branded a terrorist. He strongly denies the accusation. Celik said Turkey had survived “a coup attempt by a terrorist organisation”, adding: “We have the PKK, Daesh [Isis] and other groups launching attacks so it would not be intelligent to make an amendment in the terrorism law at this point.”

The bottom line is that suddenly the migrant deal appears close to collapse, perhaps with the “gentle nudging” of Russia. One EU diplomat based in Ankara said it was not clear that the collapse of the agreement would even make a difference. “It is not the Turks who are stopping the refugees. It is the fact that the Balkan route is closed — and that the processing in Greece is taking so long,” said the source. According to official figures, before the agreement, about 1,740 migrants were crossing from Turkey’s Aegean coast to the chain of nearby Greek islands every day. In June, the daily average was 48.

That said, we may very soon find out just how closed the Balkan route is if and when Erdogan pulls the plug. The last thing Europe already on edge following a surge in refugee terrorism- and certainly Merkel’s tumbling popularity – needs, is another million migrants taking advantage of Germany’s “open door” policy.