“The poor lamb, my heart goes out to her!

Seriously, the elite must know about this, so what is really going on?
Is Barrie going to be the last & permanent President?”

This doesn’t look real to me. 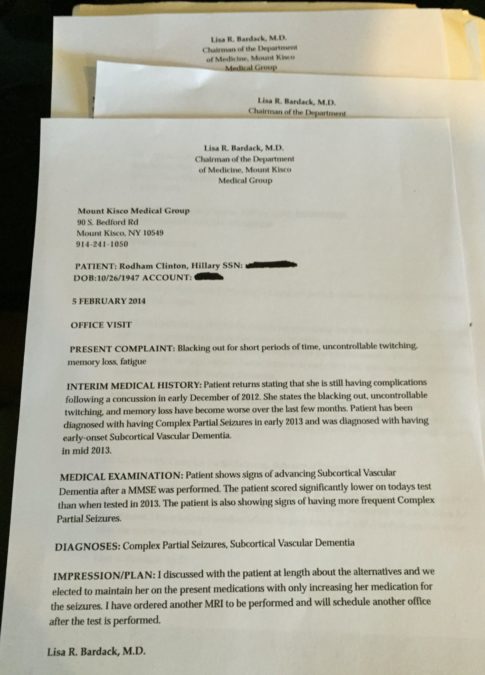 A devastating medical history regarding Hillary Clinton has been released on the social networking website Twitter and it says Hillary Clinton is suffering from “Dementia, Seizures, Blackouts” and more. She is medically unfit to be President of the United States.  The tweet and its medical report appear below:

They show a very sick woman unfit to hold office.

According to the Lou Ruvo Center for Brain Health, “Subcortical Vascular Dementia” is defined as follows:

Subcortical Vascular Dementia. Subcortical vascular dementia, also called Binswanger’s disease, is caused by widespread, microscopic areas of damage to the brain resulting from the thickening and narrowing (atherosclerosis) of arteries that supply blood to the subcortical areas of the brain.

The medical definition above makes clear that Hillary’s condition is also known as “Binswanger’s disease (BD).”  We checked with the National Institutes of Health (NIH) and they offer the following information:

What is Binswanger’s Disease?

Binswanger’s disease (BD), also called subcortical vascular dementia, is a type of dementia caused by widespread, microscopic areas of damage to the deep layers of white matter in the brain. The damage is the result of the thickening and narrowing (atherosclerosis) of arteries that feed the subcortical areas of the brain. Atherosclerosis (commonly known as “hardening of the arteries”) is a systemic process that affects blood vessels throughout the body. It begins late in the fourth decade of life and increases in severity with age. As the arteries become more and more narrowed, the blood supplied by those arteries decreases and brain tissue dies. A characteristic pattern of BD-damaged brain tissue can be seen with modern brain imaging techniques such as CT scans or magnetic resonance imaging (MRI). The symptoms associated with BD are related to the disruption of subcortical neural circuits that control what neuroscientists call executive cognitive functioning: short-term memory, organization, mood, the regulation of attention, the ability to act or make decisions, and appropriate behavior. The most characteristic feature of BD is psychomotor slowness – an increase in the length of time it takes, for example, for the fingers to turn the thought of a letter into the shape of a letter on a piece of paper. Other symptoms include forgetfulness (but not as severe as the forgetfulness of Alzheimer’s disease), changes in speech, an unsteady gait, clumsiness or frequent falls, changes in personality or mood (most likely in the form of apathy, irritability, and depression), and urinary symptoms that aren’t caused by urological disease. Brain imaging, which reveals the characteristic brain lesions of BD, is essential for a positive diagnosis.

Is there any treatment?

There is no specific course of treatment for BD. Treatment is symptomatic. People with depression or anxiety may require antidepressant medications such as the serotonin-specific reuptake inhibitors (SSRI) sertraline or citalopram. Atypical antipsychotic drugs, such as risperidone and olanzapine, can be useful in individuals with agitation and disruptive behavior. Recent drug trials with the drug memantine have shown improved cognition and stabilization of global functioning and behavior. The successful management of hypertension and diabetes can slow the progression of atherosclerosis, and subsequently slow the progress of BD. Because there is no cure, the best treatment is preventive, early in the adult years, by controlling risk factors such as hypertension, diabetes, and smoking.

What is the prognosis?

BD is a progressive disease; there is no cure. Changes may be sudden or gradual and then progress in a stepwise manner. BD can often coexist with Alzheimer’s disease. Behaviors that slow the progression of high blood pressure, diabetes, and atherosclerosis — such as eating a healthy diet and keeping healthy wake/sleep schedules, exercising, and not smoking or drinking too much alcohol — can also slow the progression of BD.

What research is being done?

The National Institute of Neurological Disorders and Stroke (NINDS) conducts research related to BD in its laboratories at the National Institutes of Health (NIH), and also supports additional research through grants to major medical institutions across the country. Much of this research focuses on finding better ways to prevent, treat, and ultimately cure neurological disorders, such as BD.

We do NOT like the fact that someone seems to have unlawfully released what appears to be a legitimate medical record.  Such records are protected by federal law, which provides stiff penalties of both civil and criminal nature for what appears to have been done.  That said, this release does constitute “news” and we are a credentialed news media entity with Freedom of the Press as protected under the First Amendment to the Constitution for the United States.

Court cases in the past, involving “Classified” or “Top Secret” information, have been published by other news outlets such as The New York Times in “The Pentagon Papers” case, and courts have held that as long as the media outlet itself did not participate in the theft or improper obtaining of the materials, they could not be prosecuted or sued for publishing it as news.

Our intent is solely to report this as “news” about a candidate for the highest office in the land, who may be medically unqualified to be President of the United States.  We have no intent to harm anyone, and are not earning any money from this disclosure.  We simply believe it is our responsibility to report this news so as to protect the nation!

The First Amendment isn’t about protecting speech we all like; it protects speech we do not like.  It’s one way the Founding Fathers kept us free, and allowed a free press to keep us informed.  This press freedom is important because only through a vigorous free press, can citizens be kept informed of important issues that affect their lives.

1 thought on “This Doesn’t Look Real To Me: “HILLARY MEDICAL RECORDS REVEALED! “DEMENTIA; SEIZURES, BLACK-OUTS” WE HAVE THE REPORT!!!””