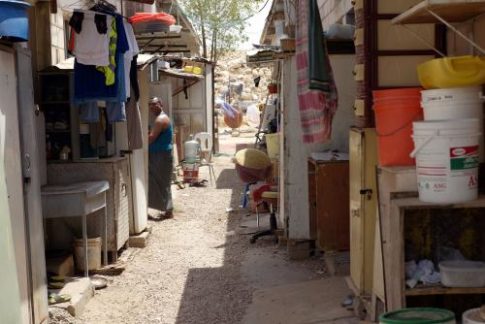 Sinking oil prices and a full blown liquidity crisis has brought the Saudi Arabian economy to screeching halt, a topic we’ve explored on various occasions.  The Saudi construction industry has been among the hardest hit as government building contracts have disappeared and bank financing has dried up (something we discussed in a post entitled “Saudi Arabia Admits To A Full-Blown Liquidity Crisis: Will Pay Government Contractors With IOUs, Debt“). We got dramatic confirmation of this for the first time in late April when the BinLadin Group, one of Saudi Arabia’s biggest firms and among the Middle East’s largest builders, whose total workforce is around 200,000, announced it had just fired a quarter of its total staff amid a major operational restructuring as Saudi government spending cuts slammed the company’s primary source of revenue.

Since then it’s only gotten worse. As Bloomberg reports, construction contracts shrank by 65% YoY in 2Q16 according to Jeddah-based National Commercial Bank.

The slowdown in construction has caused two of The Kingdom’s largest construction companies, Saudi Oger and the abovementioned Saudi BinLadin Group, to layoff and abandon 1,000s of foreign workers in the middle of the Saudi desert without pay and no way home.  In fact, not only are workers left without a job, in many cases they’re owed 8-10 months of back pay which their employers aren’t paying.  To add insult to injury, even if workers wanted to forego back wages and return home they’re not allowed to do so as exit visas for foreign workers have to be arranged by employers.  That said, employers can’t arrange exit visas until back wages and benefits have been paid which firms like Saudi Oger and Saudi BinLadin apparently can’t afford to do.

So effectively tens of thousands of people have been abandoned in the middle of the Saudi Desert (where summer temperatures spike to 122 degrees) with no job, no money and no way home.  Here is more from Bloomberg:

Abandoned laborers, including nearly 16,000 from India and Pakistan alone, according to their governments, haven’t seen a paycheck in about eight months. Under a system of sponsorship known as kafala that leaves many workers at their employers’ mercy, they’re also not being given the exit visas they need to leave the world’s largest oil exporter. In Saudi Arabia, it’s up to employers to arrange such visas, but before doing so they’d have to pay back wages and end-of-service benefits.

Calls made to the Saudi Oger Ltd. and Saudi BinLadin Group construction companies weren’t returned. At King Salman’s order, stranded workers will be given food and medical services, and can receive exit visas directly from the state, the Labor Ministry said in a statement Monday, pledging to safeguard their rights and resolve their problems. Legal representation will be furnished pro bono, the ministry said. Workers have said they don’t want to leave without their money.

Living conditions in the work camps, as described by Bloomberg, are less than ideal with temperatures soaring to 122 degrees in the summer and frequent power outages leaving workers without air conditioning.

The conditions in which the workers from Bangladesh, India, Sri Lanka, Pakistan and the Philippines wait are fetid and cramped. They sleep eight to a tiny concrete room and share dirty toilets with feral cats. Temperatures soar to 50 degrees Celsius (122 degrees Fahrenheit) in the summer, and the electricity powering air conditioners often goes off. Some of the laborers are so destitute that they only own one set of clothes. 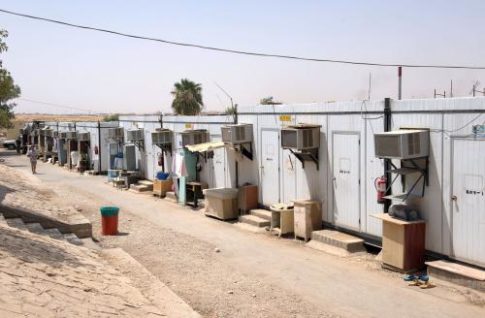 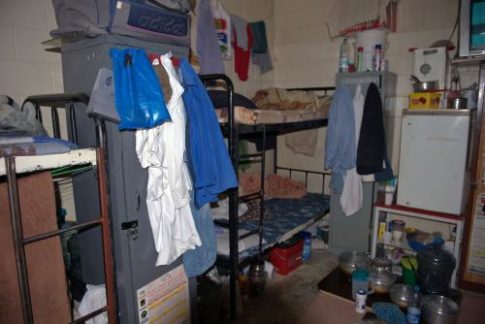 Needless to say, foreign workers are growing increasingly frustrated as they just want to collect back wages and return home.

“They don’t give us any answers about our salaries,” said Mohammed Salahaldeen, a duct fabricator from Bangladesh, as he stood in a labor camp in Riyadh set up by the Saudi Oger construction company in better days. “After they pay me my salary and benefits, I will go.”

Meanwhile, the Saudi government is adamant that none of this has anything to do with the Saudi economy. Deputy Crown Prince bin Salman, and the country’s defacto oil tzar, told Bloomberg Oger’s “problems were unrelated to the Saudi economy” and that BinLadin had been barred from new government construction projects “after a crane operated by the company collapsed in Mecca, killing more than 100 people.”

So there you have it: tens of thoussands of no longer necessary workers, trapped in labor camps in the middle of the desert, with nowhere to go and no money to spend, all over some simple safety violations.  Nothing to see here.