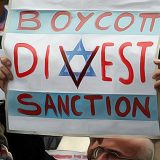 – Israel Unveils Plan to Track and Deport Those in Favor of BDS Movement:

Amplifying the growing crackdown on dissent and specifically the Boycott, Divestment, and Sanctions (BDS) movement for Palestinian rights, the Israeli government this weekend unveiled a new initiative to track and deport activists suspected of supporting the campaign.

Strategic Affairs Minister Gilad Erdan and Interior Minister Arye Dery on Sunday announced the creation of a new government task force charged with gathering intelligence on pro-Palestininian activists and organizations with the intent, as Haaretz put it, of collecting enough evidence to legally deport them from Israel or the occupied West Bank.

“We have the responsibility to do all we can to crush the boycott and say clearly that we will not allow the State of Israel to be harmed,” Dery said.

Later, Erdan took to Facebook to call on Israeli citizens to help by informing the government of suspicious activities.

“If you have information about someone who is pretending to be a tourist but is in fact a boycott activist visiting Israel, let us know and we’ll act to have him expelled from Israel,” he wrote.

“After failing to counter or even diminish the unmistakable impact of BDS in isolating its brutal regime of oppression, Israel is dropping the mask,” said BNC spokesperson Abd al-Rahman Abu Nahel. “It is revealing its true face to the world as a ruthless, warmongering pariah state, and it is resorting to the same repressive tools deployed by apartheid South Africa in its last chapter, before its eventual collapse.”

“This latest weapon in the intensifying Israeli legal, espionage, and propaganda war against the BDS movement for Palestinian rights is a strong indicator of how desperate and irrational Israel’s regime of occupation, settler-colonialism, and apartheid has become in its futile attempts to hinder the impressive growth of the BDS movement around the world,” Abu Nahel added.

Mainstream organisations and even governments recognise Israel’s repressive war against BDS as a dangerous challenge to fundamental freedoms. Representatives of the Swedish, Irish and Dutch governments have publicly defended the right to advocate and campaign for Palestinian rights under international law through BDS, as have organisations including Amnesty International, the International Federation for Human Rights (FIDH) and the American Civil Liberties Union.

At the same time, efforts to stamp out BDS activities have also grown—particularly within Israel-ally states, including the U.S., the United Kingdom, France, and Canada.

In the U.S., an argument over whether to support or suppress the campaign drove a massive rift within the Democratic Party during the platform negotiations while Democratic nominee Hillary Clinton has voiced strong opposition to the movement.

“We salute every person of conscience around the world who has creatively, passionately and selflessly supported the Palestinian struggle for our rights under international law,” Abu Nahel concluded the statement. “We are confident that Israel’s intensifying repression notwithstanding, this principled solidarity will significantly contribute to the struggle for Palestinian freedom, justice and equality.”