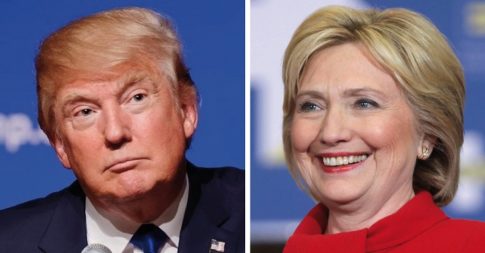 As November inches closer, America’s two-party duopoly continues to implode. Disillusioned Democrats are making a mass exodus from their party while prominent Republicans vow to support Clinton over Trump, and once clear-cut lines in American politics are disintegrating as Americans seek other, actually “less evil” options.

Just before the Democratic National Convention last month, revelations from Wikileaks’ dump of thousands of Democratic National Committee emails confirmed many Sanders supporters’ fears. The party colludes with the media, and top officials attempted to use that influence to paint Sanders as an incompetent candidate in an arguably rigged election.

At the convention, the DNC’s decision to nominate Clinton and build walls in order to keep protesters out further spurred disenchanted Democrats away from the party. In fact, Sanders’s own delegates booed him when he told them to support Clinton, and dozens staged a walkout during the official nominating ceremony.

The exit of Democratic voters following the convention was dubbed #DemExit, and even Sanders reportedly left the party to return to his “independent” status in the Senate.

As one now-former Democrat wrote in a blog titled, “Dear Democratic Party, I’m Leaving You and I’m Taking the Kids”:

The blogger vowed to “spend the remainder of [their] years fighting against them,” and is joined by prominent liberals equally offended by the primary process and party corruption.

Growing disdain for the Democratic Party and Hillary Clinton is matched only by the Republicans vowing #NeverTrump. Some of the Republican Party’s most prominent figures are promising to vote for Clinton over the current Republican candidate.

Considering Clinton’s past support for so-called “free trade deals,” her ambitious hawkishness, her allegiance to corporate oligarchs and her Cold War rhetoric against Russia, it should come as no surprise that establishment Republicans are siding with her over Trump. Of course, Republicans do not cite these reasons for supporting Clinton. Rather, they invoke the same lesser of two evils argument the Clinton camp has been feverishly selling.

“It’s not enough to simply not support Trump,” said Charles Fried, who was solicitor general during the Reagan administration, as reported by the Atlantic. “It is imperative that this man not be allowed to get anywhere near the levers of power. He must be defeated, and the only way to do that is by supporting Hillary Clinton.”

Fried said he has received praise from other Republicans for supporting Clinton.

Former Reagan aide Doug Elmets enthusiastically chose Clinton over Trump, to whom he referred as a “toddler.” He likened voting for Clinton to being a patriot:

“To my fellow Republicans, if you believe like I do, you believe that loyalty to our country is more important than loyalty to party, I ask that you join me in voting for Hillary Clinton.”

The Washington Post — which, coincidentally, was implicated in the DNC leaks — compiled a thorough list of Republican figures siding with Clinton over Trump. They include former Bush officials like Henry Paulson, who served as former secretary of the treasury; prominent neoconservatives like the Brookings Institution’s Robert Kagan and Max Boot, a senior fellow at the Council on Foreign Relations; aides from former Republican administrations; and Republican political operatives.

Some, like former Mitt Romney aide Mike Treiser, claimed to care about tolerance and peace in their justifications for supporting Clinton. “In the face of bigotry, hatred, violence, and small-mindedness, this time, I’m with her,” he said, condemning Donald Trump’s despicably violent rhetoric while expressing support for a politician who aggressively pushes violent policies.

Those leaving the Democratic Party out of principle and in search of better options may be more worthy of praise than prominent Republicans siding with Clinton because she will maintain the status quo. But in both instances, traditional party loyalties are being thrust out the window.

The fact that diehard members of the Republican party are opting to vote for Clinton shoots holes in the popular, long-standing belief that the Democratic and Republican parties represent fundamentally different values. That so many established Republicans are abandoning their party in favor of a politician reviled by the Right demonstrates how few differences there are between the two parties – and what lengths those in power will go to in order to maintain the current paradigm.

In contrast, growing numbers of Americans have expressed desires for third-party options. Both Gary Johnson and Jill Stein are receiving increased support in polls, especially among young people (Stein is still not included on ballots in all 50 states, meaning it is currently impossible for her to win a national election).

Nevertheless, the establishment’s fear is apparent. Last week, a federal judge rejected a lawsuit filed by Gary Johnson to force the Commission on Presidential Debates to allow him to participate in upcoming debates. As Johnson’s campaign manager, Ron Nielson, said:

“There is clearly an unprecedented desire for alternatives to the Republican and Democratic nominees, and voters deserve an opportunity to see and hear that there are, in fact, other credible, serious choices.”