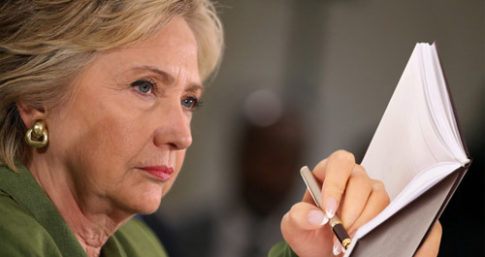 – Retired Green Beret Blasts “Make No Mistake, Everyone Warning About Clinton Is A Target And They Are Marked”:

The Obama Administration has been characterized by not only a lack of transparency on issues that surface, but a deliberate obfuscation to mask true actions and intentions.  There are literally no limits to what the man and his handlers will do outside of the law to attain their ends, while simultaneously “crafting” legislation to enslave the citizenry.  The fawning, lying press trumpets his victories and quietly spins his defeats: objectivity cannot be maintained by journalists on the government payroll and command.

Hence a sitting American president, a man who should have been hauled off of a stage in 2012 and clapped in irons for treason is able to do whatever he wants.  Remember?

“Tell Vladimir I’ll have more leeway after the election.”

Now the Congress and the State Department labeled Iran both a “rogue state that supports terrorism” and “a supporter of Hezbollah and Al-Qaeda.”  So my question is where did Obama secure the necessary Congressional approval to airlift $400 million to Iran on January 17, 2016?  More: Since this was Obama’s move, did he not use his position unilaterally and without any Congressional approval to provide funding to a nation that supports (and conducts direct action missions to complement) terrorist activities?  And this is with Iran, that vows to strike the U.S.?

Just as in the same vein, how can we join Russia in a bombing campaign of “boogeyman” ISIL/ISIS when we, the U.S., created it?

Just as in the same vein, how can we send a QRF (Quick Reaction Force) of our military’s finest commandos to stop the slaughter of an American ambassador and his staff in Libya…when we approved of and enabled it?

The “administration,” if you prefer that ludicrous term to the true state, the “regime,” is made of Teflon…nothing can touch it.  Fast and Furious proved it.  Hillary’s e-mails proved it.  The cashiering of half of the admiralty and general staff of the United States Armed Forces proved it.  The removal of TARS, of the scrambling of fighters, the scrapping of the A-10 Warthog, the cessation of Tomahawk production…all of these measures prove it.  Obamacare steamrolling through the (at the time) Democrat-controlled Congress…enabled by Senator Olympia Snow (R, Maine) proved it.  The hearings and the deciding vote.

Nothing can stop the administration.  Nothing.  And nothing will be able to stop the next one.

Does everyone really think that Trump will be elected?  Really?  Throughout the past two weeks, he has literally run on “self-destruct” and must have a lobotomized campaign manager.  Haven’t we seen this before, when Romney won the first debate and made a fool out of Obama, and then turned into a neutered eunuch for the next debates?

Do not be fooled: it is all intentional.

There is no such thing as an election, only a controlled paradigm shift with a force-fed theatrical playbill that the dumbed-down public gobbles up.  The two “camps” of Democrat and Republican, and the illusion of a colossal battle, a political “Clash of the Titans” between conservatism and socialism drawing the focus and attention of the people away from surrounding events nationally and in the world.

Look at Hanna, the alleged Republican…the first of the jackasses to come out and support Hillary Clinton.  Look at the moneyed interests pooling behind her: Meg Whitman, Warren Buffet, and the invisible but ever-present incubus of George Soros, the man who destroys countries for a hobby and a price.  Look at Hillary, the “good wife,” the “good mother,” the “good 501-C-3” member with a billion dollar “kitty” in the Clinton Foundation and three Delaware shell corporations to hide her loot.  The “good speaker,” snagging $50 – 200 K dollars per speech.

The good fundraiser who raised $90 million dollars in the month of July alone.

By her campaign slogan… “I’m with Her” …by those very words are such notables as James Comey, Loretta Lynch, Houma Abedin, Debbie Wassermann-Schultz…all of them…complicit with her in the crimes she has committed.  She would provoke a nuclear war with Russia in order to prevent those e-mails from coming to light.

Her “candidacy” is a degradation and an abasement, not only of the American Justice system, but of the entire Constitution of the United States and the freedom of every citizen.  Those who are “with her” don’t even realize they’ll be the first ones in the gristmill when the time arrives.  That time is almost here.  It’s all been smoke and mirrors, but soon there won’t need to be.  The obfuscations and treacherous maneuvers are masked but in a short time they’ll all be completely unveiled.

The 2nd Amendment will be completely destroyed and/or nullified.  The face of this entire country is going to change, and akin to most bad things, it’ll have to happen before people realize it and take action.

Everybody who criticizes the incoming dictator is marked, make no mistake about it.  We still have a little bit of time, but not much, and effects generated need to have substance, not form.  No juvenile displays of occupying a shed/storage room/visitor center in a National Park or Forest.  No standoffs with a disbandment and then everyone is arrested individually.  The torch is being passed.  Everyone who is criticizing Obama and warning about Clinton is a target and they are marked, along with countless others of the 325 million of us.

If Hillary Clinton takes the presidency, it is the end of the United States.