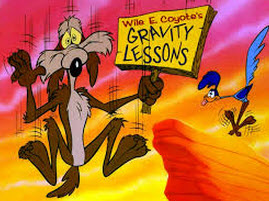 Submitted by Howard Kunstler via Kunstler.com,

Wake the fuck up! Today we turn from the sordid dumbshow of Election 2016 to the parlous mysteries of finance and economics behind our sick politics. Most of the commentary in the mainstream special needs news media is based on the incorrect notion that the current disposition of things is sure to continue and therefore all we have to do is manage the familiar dynamics of the operating system in place. For instance, Grand Vizier Paul Krugman in today’s New York Times pimping for the US to issue ever-greater debt to repair US infrastructure. Does it seem like a sound idea? Borrow tons more money to get American running gear back in order so we can return to a growth economy. (There’s even a Trumpian gloss to it.)

Here’s the catch: the “growth economy” of which they chatter is done. You can stick a fork in it. The techno-industrial fantasia is drawing to a close. We are heading into a long term contraction of activity, productivity, and population and the salient question is how disorderly will the long emergency of the journey be to that new disposition of things?

The wish to keep all our rackets running is understandable. They have provided a lot of comfort, convenience, and luxury. But we are no longer in Alexander Hamilton’s world of cornucopian American abundance, just needing to borrow a little from the future to get at the gargantuan riches of a wilderness empire. We’ve been there and done that, and our present-day techno-narcissistic wish to replace all that spent material abundance with a Pokemon Go virtual reality economy is sure to lead to epochal disenchantment.

Borrowing from the future only works when you have some real prospect of paying the future back. The institutions that govern borrowing have been pretending for some time that our debts can be paid back. The untruth of this can be easily traced to the revocation of FASB (the Financial Accounting Standards Board) Rule 157 in 2009, which said that banks no longer had to report the market value of the loans on their books, but rather could make up any old number that made things appear to pencil out. In other words FASB decided that standards were optional. But that is only one cog in the great wheel of fraud that has rotated mercilessly with the seasons since the Fall of 2008.

What we face is discontinuity, the end of old spent dynamics and the beginning of new dynamics. Monetary deflation has been underway for years because that’s what happens when debts can’t be repaid: money vanishes. Now we will encounter the other dimensions of deflation: the contraction of manufacturing, trade, wages, and all the familiar markers of expansion in the waning techno-industrial era. The many dodges and stratagems tried by the supreme central bankers to work around contraction only produce ever greater distortions in markets, currencies, and the distribution of dwindling capital, leading to a grand battle over the table-scraps of history, i.e. the rise of radical politics world-wide, including Islamic Jihadism, and the western response in Trump, LePen, and the nascent Germanic right-wing. These current manifestations may be mild versions of what’s coming.

Nobody in power can come to grips with the reality of our situation. We have to salvage what we can and get smaller, becoming a more modest presence here, or the planet itself is going to hit the delete button on us. It rubs against the current religion of progress, which has replaced the other old cultic practices. The choice now is between time-out or game over, and the debate over these things is absent from the arena.

The aforesaid distortions in markets, currencies, and capital are spinning out in an ever broader, centrifugal gyre, coinciding, as chance would have it, with the most peculiar election in modern times. The incoherence and deceit on both sides is far beyond even the extravagant American norms of dauntless political bullshit. We literally have no idea what we’re doing in this country, or what we’re actually wishing for. The financial structures of everyday life look more fragile than ever. Gravity always wins.