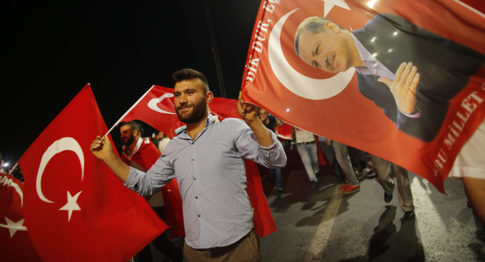 – Erdogan Vows Death Penalty for 18,000 Arrested for Mutiny Citing Will of People:

Speaking before the massive crowd of people that gathered at the Istanbul’s waterfront for anti-coup rally on Sunday, Turkish leader Recep Tayyip Erdogan pledged to return the death penalty that was canceled in the country over ten years ago.

The “Democracy and Martyrs’ Rally” rally was gathered at Istanbul’s Yenikapi area to demonstrate “Turkish unity” following aborted overthrow of the government that rattled the country on July 15.

During his highly emotional speech, Erdogan vowed to cleanse the country from all the supporters of Fethullah Gulen, an exiled cleric whom Turkish authorities blame the putsch attempt on.The president claimed that he supports the demands from people to reintroduce the capital punishment for participants of the mutiny. He noted that he would sign such a law into power if the parliament adopted it.

According to some estimates, over a million of people took to the streets in Istanbul. The rally was also demonstrated on huge outdoor screens set up across all the country’s 81 provinces, according to local media.

The meeting was attended by major opposition parties, an event not seen by the country for decades. Republican People’s Party Chairman Kemal Kilicdaroglu said that the failed coup opened the door for “reconciliation” of political forces in the country and said it will lead to emergence of a new “great Turkey.”

On July 15, a group of rebels attempted to overthrow the government in Turkey. The major standoff between the putschists and supporters of the government unfolded in Ankara and Istanbul, the country’s major cities. As the mutiny was crashed, some 246 civilians were killed and more than 2,000 wounded. Over 18,000 people suspected of plotting the coup, have been arrested, accoring to Deutsche Welle.The last time death warrant was enforced in Turkey in 1984. Two decades later, Ankara abolished capital punishment in a bid to comply with EU standards for further incorporation of the country into the bloc. Earlier, President of the European Commission Jean-Claude Juncker threatened that the EU will suspend the process of accession of Turkey to the union, if the death penalty is restored.