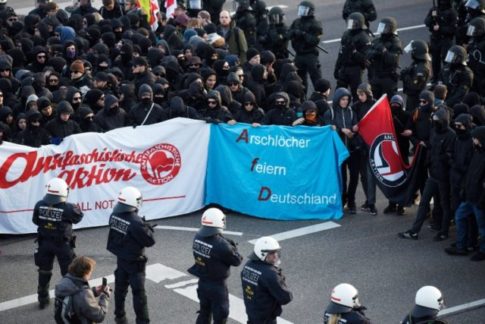 The police chief of the city of Göttingen expressed his shock at the scale of violence that has erupted towards his officers from left wing extremists who he claims view police as the enemy.

The comments made by Thomas Rath, Chief of the Göttingen police forces, comes after brutal clashes at a demonstration that occurred Sunday. According to Mr. Rath, the left wing extremist protesters who demonstrated against a meeting of a right wing group known as the “Circle of Friends Niedersachsen/Thüringen,” had taken out their anger on his officers.

He claimed that seven of his officers had been so badly injured by the leftists that they were left unfit for service until further notice, reports public broadcaster Norddeutscher Rundfunk.

Police Chief Rath told the broadcaster that for the left wing extremists the presence of right wing groups was a “stab in the heart”. He said: “In their view, the right wingers have no place in the city. Their goal is therefore to prevent their events by all means,” which includes violent action.

Mr. Rath said that the trend of leftists attacking his police officers was on the rise, and that demonstrations between left and right groups tended to be the main locations for violent assaults toward police.

“When we separate left and right groups, for example, during a demonstration, my colleagues have to regularly serve as a kind of substitute for the political opponents,” he said. The scale and ferocity of the hatred toward police shocked him and he stated that “the hatred and dehumanising hostility” his colleagues received from the leftists along with the beatings “left [him] speechless”.

Some left wing groups like the Goettingen “Alliance Against Law” blamed the police for the escalation and accused them of roughing up families and peaceful protesters. Chief Rath dismissed these claims saying that the police only arrested extremists and anarchists who were throwing missiles at both right wing demonstrators and fellow officers.

Left wing violence in Germany and Europe is becoming an epidemic as reports show incidents of left wing violence have far outpaced right wing violence. Physical assaults against police have especially become more common. Earlier this year anarchists who tried to shut down the annual meeting of the anti-mass migration Alternative for Germany (AfD) party clashed heavily with authorities.

Right wing demonstrators have also been injured in a number of incidents by leftists, most notably at an Identitarian march in Vienna in which left extremists threw bricks and stones from the roof of a building, severely injuring one man who had to be put in an artificial coma due to potentially life threatening injuries.